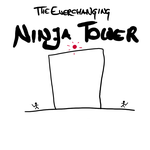 The Orb of Heavenly Essence has fallen on top of Uwaki Tower. Two clans have sent their best ninja warriors to retrieve it through any means necessary.

And the means are swordfighting, jumping around and reshaping Uwaki Tower itself!

4100x2500 ought to be small enough for anybody
Presented by adrwen


9% respondents marked the game as not working.
3% of respondents wished to disqualify the entry.
Respondents: 19

After throwing around our design ideas at breakfast one of them emerged victorious! We are making "Uwaki Kenchiku Ninja", or "Ninja Tower" for anyone who doesn't want to spend an hour playing with Google Translate like I did.

The game revolves around terrain deformation which will result in wibbly-wobbly towers with any luck. I will write a simple AI if I have enough time left, but it's primarily a hectic two-player game (I hope somewhat like Jump 'n Bump).

Today I tried to get the terrain deformation and jumping physics to work, since everything hinges on these and I won't have much time during the week. It's working okay, but of course could still use some improvement. However, next up are animation and sounds for tomorrow and ropes and traps after that.

The basic jumping around and swordfighting is doing okay now, and I made a few animated GIFs for your enjoyment:

I will make sound effects tomorrow and in general try to make the game a game: add some in-game instructions, scoring, game over screen, etc. I hope I will have some time after that to add the fancy stuff (traps!), but even if not, it will still be something to submit!

And I have to get my wife to make ninja music. She's slacking off studying math instead of helping me out!

Make sure you have someone to play against! It's not a lot of fun with only one player and I had no time to write an AI (it would have taken a week on its own I guess).

We finished the sounds today and I think they complete the personality of the game very nicely. I'm the voice of the left ninja and my wife, Beata has voiced the ninja on the right. I have also framed the game with instructions (like in the image above) and gameover screens today, so it will hopefully give the impression of a proper game to casual observers. The game starts up with a randomly chosen song (of a set of 3), so do not be alarmed if you hear very off-key whistling — a simple restart will probably fix it.

Although our towers do not sway I hope they can still be called wibbly-wobbly. They look really unstable when cut the right way!

I resisted playing your games until now, but I am looking forward to indulging myself next week! Have a nice Easter!

Finally I got my hands on iMovie and uploaded a properly cut little gameplay video: