Your wavelength dimensional convolver has overloaded... breaking color itself! All the color is starting to drain out of the world, starting with the lower frequencies.  I never thought I'd have a use for this word, but it's... a huepocalypse!

If you don't fix it soon, the entire planet will turn red!  We think all color might drain out of the entire solar system--not that we'd notice, as we'll all be dead by then.

You're going to have to put on that silly silver color stabilization suit and run out and fix everything! Good thing you're such a gym rat--all that cardio and parkour is going to come in handy!

Dr. Farb's Huepocalypse was written by Larry Hastings and Dan Pope in September 2022 for the PyWeek 34 game programming contest.

Huepocalypse is written in Python 3. We used Python 3.10 during development, so we'll assume you're using that version.  (Though it's possible other versions work fine.)

If you exit this venv, or attempt to run the game from a different shell, you'll need to "activate" the venv again in that instance of the shell.  If you forget to activate, the game will complain with a

Huepocalypse is a platformer game. You control a scientist named Dr. Hugh Farb.

Your goal is to finish every level. Every goal has some objectives:

Once you've collected all the floating gems and killed all the monsters, you're ready for departure--but you have to get to the departure point. This is a little door that opens when it's ready to send you to the next level.

You have infinite lives. So, you've got that going for you.

Movement features of your character:

Color plays a big role in the Huepocalypse. There are six colors:

Each of them can be toggled on and off in various ways.  And when a color is turned off, all the platforms and walls of that color disappear! They only come back when you turn that color back on.

(Gray platforms are super safe--they never disappear on you.)

But it gets more complicated! When you turn on or off one of the three *secondary* colors, it also affects the two related *primary* colors:

(Though it doesn't go the other way--toggling red doesn't affect orange or purple.)

Oh, I almost forgot! There's one more wrinkle. The blue and purple colors are even more unstable than the rest. I'm afraid that you can only turn them off for short bursts. Then they pop back on all by themselves!

You'll see the following sorts of objects and terrain in levels:

And there are even sometimes things for you to pick up, like:

But it's not all good news. You'll also see:

Oh, I almost forgot! And we've saved the best for last. One last bit of terrain:

Number keys toggle a color, if you've picked up the correct color actuator:

And you can use Ctrl-Q to quit at any time.

If you want to skip the tutorial and just play the challenge levels, run the game with the -c or --challenge flags:

And if you want to jump to a particular level, just specify the unique part of the level's filename. All the level files are

So, to jump straight to "Go Hunting", you'd run

Have fun!  Now go save the world already!

Use The Walls to Climb
Presented by Jeb

Sorry for the lack of diary entries--boy it's been slow going this week!

We're writing a "color platformer".  The idea is, you can switch colors on and off in the world.  If a platform is red, and you turn off red, the platform disappears and you won't collide with it.

It's mostly preliminary art for now.  You're the snowman-looking dude, the glowing red thing is a switch, the mushroom-y things are checkpoints.  Collect the gems. 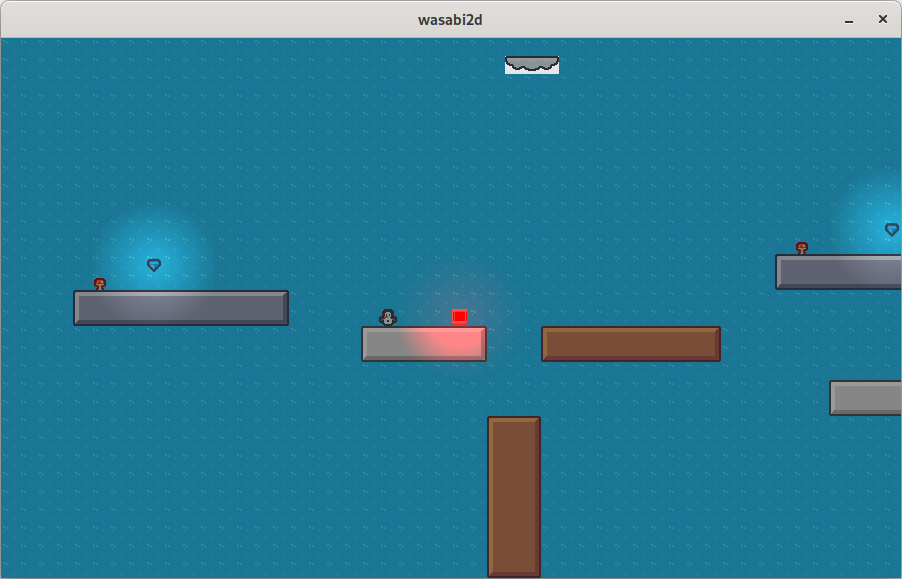 If you move right and touch the red switch-- 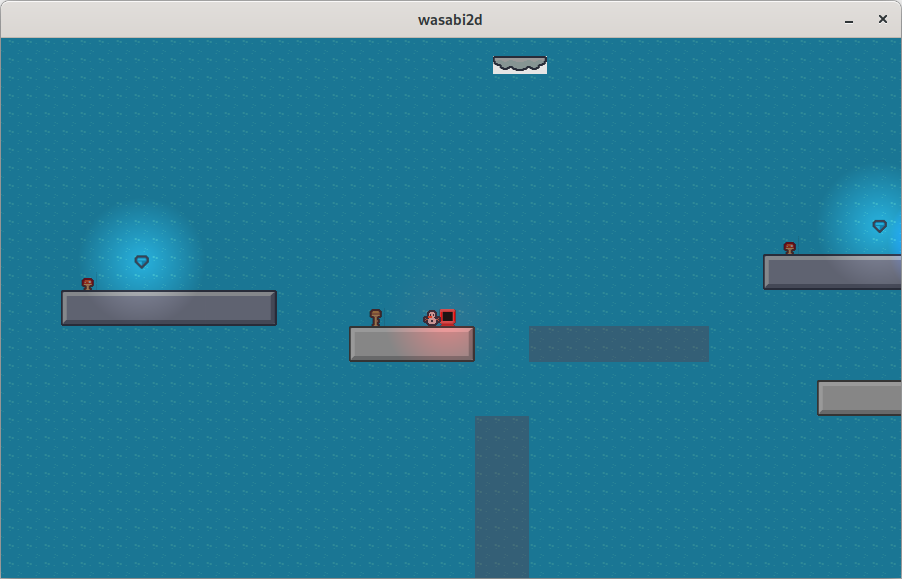 you turn off red!

Physics and collision has eaten an outsided portion of our time. But at this point I think the game feels great.

Celeste is our north star for good-feeling platform game.  Many times this week I've reviewed the "Why Does Celeste Feel So Good To Play?" video from Game Maker's Toolkit and Maddy Thorson's thread on Twitter about Celeste's physics concessions that make the game more fun to play so I can accurately steal their lovely ideas. This is my first time implementing "coyote time" and what I'm calling "wall scraping", and I'm looking forward to "jump buffering" next.  I don't think we're gonna do an "air dash" though.