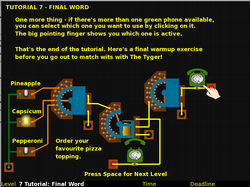 The last screen of the tutorial. Also the last level as yet...:-(

The year is 1973. A madman with a grudge against telephone companies, calling himself THE TYGER, is planting bombs in telephone exchanges across the country, wired so he can set them off with a phone call.

Your task is to take the TWINKLE out of the Tyger's eye by tracing the connections through the TWISTED and tortuous circuits of the softly TICKING exchange equipment, and finding a way to disarm the bombs before time runs out.

Only you can save the country's vital communications infrastructure from being thrown into TURMOIL...

Note: The screen shot at right is NOT the last level any more, but screen shot uploading doesn't seem to be working at the moment.


6% respondents marked the game as not working.
1% of respondents wished to disqualify the entry.
Respondents: 42

This has been the most successful of my PyWeek entries so far, by a large margin. I'm personally quite pleased by the way it turned out. Somehow I managed to hit on something that I was able to implement fairly completely and still have some time left for polishing and level design.

From the feedback, it seems that most people who were able to play the game properly liked it. However, the random level ordering bug appears to have ruined it for many people. Sorry about that! I was undone by an unexpected "feature" of Linux -- the glob function there apparently doesn't return its results sorted. I posted a fix, but maybe I didn't advertise it clearly enough.

Counting terminals: I hadn't intended that part to be so tedious. I'm thinking about numbering the terminals on the selectors in a future version, which may help to alleviate that.

Repetitiveness: I was trying to introduce some variety into the later levels, but I didn't have much time for level design. The same goes for gradation of difficulty, etc. Any suggestions for improvement in this area are welcome.

Use of multiple themes: There's nothing in the rules that says you can't do that, so there. I didn't write any code before the start, other than my Albow library that I documented and released several months earlier. If you're not willing to take my word for that, there's nothing I can do about it.

Lesson learned for next time: Always test on Linux and Windows if at all possible before the deadline!

Future plans: I'm working on a post-competition update that I hope to release Real Soon Now. I'll also be releasing an updated version of Albow incorporating the improvements I made to it while developing this game.

Thanks for all the good ratings, and to all those who commented.

Happened when I had about 3 units attacking an enemy outpost, or whatever those grey spiked things are.

I've discovered a problem that could affect play on systems other than MacOSX.

If the levels seem to be getting played in a random order, replace the following around line 85 of Code/game.py:

(I had always thought that glob() was supposed to return its results sorted, but this doesn't seem to be the case on some Linux systems!)

Here's a small patch to fix a problem causing DNA Replicator to crash on big-endian systems.

Anyone have a fix for this problem?

I've written some documentation for the level editor in 555-BOOM!.

Here are a couple of things I've learned about using pygame.mixer in the last couple of days. I'm posting them here in case they're of benefit to anyone.

Got it there at last.

This version has 9 regular levels, a new random element, and a new part.

Note that 0.5 is the most recent version to be used for judging, even though it's not listed at the top, because I made the pending uploads in a different order.

...just as soon as I can get it to accept a pending upload now that the server is back.

I've added a randomised element to some of the levels so that you can't just use the same solution every time. That should add some replay value.

If you're wondering why all the bombs seem to be silent, most of the sounds are disabled for now, until I can fix the stuttering problem.

The crash problem was caused by a case error in a sound filename. I'll have to do something to prevent that sort of thing happening again.

Things are starting to come together. It looks like I may be able to submit something resembling a finished game this time!

5 days in, and this is my first submission, and first diary entry since challenge start. Too busy coding to take any notice of the outside world!

This time I've come up with something that covers all five candidate themes! Well, sort of. You decide.

What's done so far: Most of the necessary infrastructure, and a set of tutorial levels. At least half the effort went into implementing a comprehensive built-in level editor -- which may well turn out to be the most interesting part of the game. Especially if I don't come up with a large number of astoundingly ingenious level designs in an extremely short time starting from now...

I'm having trouble playing a particular sound. It works fine the first time, but if I try to play it again there's a good chance of it getting stuck looping over a small segment.

I've tried saving the sound in .ogg and .wav formats, and with different sample rates, but it makes no difference.

Anyone else encountered something like this? Is it a known bug in pygame.mixer or SDL_mixer?

With regard to the System Capabilities poll, if I have dual 1.25GHz processors, does that count as 2+GHz or not?