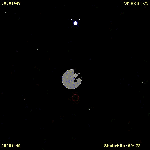 Defend the spacestation! Defend the Spacestation from the terrorist forces using WASD to fire lasers up, down, left and right. The battle will get increasingly intense! If the space station is too damaged, then the Reg5 bomber will finish the outpost off Don't Let Him In!

Day One - Off To A Fair Start

Lots happening today but a few hours were available for PyWeek. Yay! I worked on getting the structure and basic game mechanic together. The goal is achievable - I may have to finish Friday being realistic. Trying to keep the code very organised and componentised. Definitely want to add gamepad support.

The theme lends itself well to a defending type game so I combined this with the old arcade game Space Zap which is a reaction/timing game at its core. I had decided to make all GFX with primitives as my mouse is currently broken and this fits my desired look anyway. I plonked a pygame.draw.circle in the middle of the screen. Once it fired a few lasers I immediately thought..... DEATH STAR! Going to have fun with this now! Spent most of the time sorting out the level management to make it nice and flexible. The actual level building needs improved though.

On the visual side, added asteroids and a T-fighter. Tomorrow will be more level work and maybe a starfield :-)

Tonight's goal was to get very close to finishing as I am going to be occupied on Saturday (pretty much all day). A big mix of game stuff and visuals done. Tomorrow I will add sound, game over, title screen and improve explosions. The waves of attackers needs tidied up too for a better progression.

Feel like I am in a reasonable place considering it has not been the best week for time or health! :-)