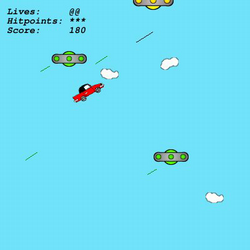 We're counting on you, Stuntsman!

A professional stunt man loads tosses himself with his car into the skies to prevent martians from taking over planet Earth!

Unfortunately, due to last-minute pyweek webserver overload, the final version of the game didn't make it into the torrent.

I'm happy to see that most of the gameplay made it into the provided demo anyway.

What most people will miss is just the mid-game dialogues (that are almost as good as the introduction's dialogue), a battle with a last boss and the ending.

I hope you guys enjoy the game. If anyone has issues running this game, let me know.

ALso, good luck for everyone else running in Pyweek. I have seen many entries already and I must say some of them are really, really interesting. =)

The "final" version, though it was the intended final for pyweek isn't going to be the last version of this game.

What do I need to work on:

-Code: The code seriously needs some cleaning up. Though I had started writing it well, the deadline got closed and sloppiness prevailed.

-Controls: They are sometimes sloppy and can make bosses harder than intended. Adding support for joysticks.

-Portability: Though I'm pretty confident this game will run on most platforms, it's appearance on 8-bit color depth displays needs to be fixed.

-Soundtrack: The introduction music is horrid. Period. Also, both the intro music and in-game music should have a faster pace. It should be kept funky, though. Funky felt good for this game.

-Sound Effects: Include some voice acting, improve some of the sounds.

-Graphics: Diversify enemy graphics. Improving graphic for shots, clouds and explosions. Much work to do in animating.

-Gameplay: Adding some powerups. Give extra lives and health to the player according to score. Allowing the car to rotate a little (thus allowing the player to shoot in different directions). Some specials.

-Enemies: Most enemies have a rather uninteresting behaviour. Actually, the one I think has the best behaviour is the green disk.

-Game Plot: I need to add more situations where I can make this plot even worse. So this means more stages, possibly including levels in outer-space.

Possibly other stuff as well.

Which other game-developing contests do you guys know? I've been thinking about running on the next Ludum Dare, but I don't know when the next contest is starting (this information is apparently unavailable right now).

I'd love to know about information on other contests.