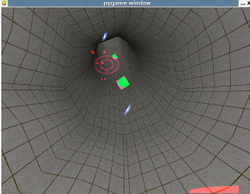 Hey! The badly textured cube is shooting back!

Fly the twisted tunnels of different planets as the royal courier! Avoid hitting civilians while blasting hostile ships to bits! Be the best pilot of the Aurora Fighter in the galaxy!

You can see some Release notes for our game describing installation and some known issues.


10% respondents marked the game as not working.
Respondents: 36

OK, again here, after pyweek3 and pyweek4. This is a smaller team than previous times, we are looking for new ways to work together.

Ok, I'm zonked. First sprint's over, we're off to bed. Quite happy to have something running already. Or moving, or showing, or something. Bed. Happy hacking to all, let the compo something!

Aurora Fighter is a 3d shooter where you navigate a ship through a dangerous twisted tunnel avoiding obstacles and trying to shoot down your opposition. I don't want to reveal any details right now to avoid spoiling the surprise, but I'm sure you'll enjoy the atmospheric feel we went for as you get immersed in the action.

It was a lot of effort, but I think we came out with a really cool game and all of the team is certainly very happy with the result. We hope you'll enjoy playing this game as much as we enjoyed making it.

From the programmer side, let me tell you we had almost decided not to go 3D before the final theme came out, except for the twisted theme, where it seemed 3D could help a lot in conveying "twistedness". None of us had significant OpenGL experience, but somehow we managed to develop an engine from scratch full of interesting features that let us create really fun and challenging levels.

We also learned a lot from previous PyWeeks on how to manage the team and set our goals, and that experience is hopefully reflected in this game.

I'll try to post an updated screenshot later, as the one we have on the entry listing was taken the second day of the competition I think. And hopefully my teammates will chip in with their impressions.

Note: We tested the game and it ran fine on Linux and Windows. However, we found a problem that seems to be caused by older PyOpenGL versions not providing the right aliases.

Luckily, it's a very easy fix. Simply change line 165 of lib/tunnel.py from:

I have received several (good) opinions on the music for our entry, so I'd like to tell a bit more about it...

The music for the levels and menus was made by a Psychedelic/techno group called Mindprobe. You can find some of their stuff at mindprobe.com.ar. We haven't heard about them before this pyweek, but lucio (from the Grossini's Vacation team) put us in contact with one of them and they told us that their music was licensed under a CC license :)

So, a big thank you goes for mindprobe, because their music collaborates a lot in setting the mood for our game. (And also a thank you for lucio)

The origin of the intro music is a bit different. It is a song under the public domain (as most national songs and anthems): it is a ceremonial song used when rising the national flag here in Argentina. We stumbled upon it almost accidentally (despite having heard it literally hundreds of times in our lives) when looking for some march which fitted the rest of the introduction.

The song is called Aurora.

This was our first time on OpenGL, and it seems we were bitten by it. We had a lot of possitive comments, but also a lot of "I get 5-6fps, it is too slow". OK, not painful death, but slow indeed :)

Certainly 6fps is slow, the game was designed to run at 60 (and is perfectly playable if that goes to 35-40).

Unfortunately, we tested several configurations (CPU/OS/video cards) and it worked like a charm. 1.5GHz and old video cards (onboard VIA and intel graphic chipsets, a low-end GeForce2, some old ATI) worked quite fine, so we didn' t worry about optimizing. At some moments it slowed down a little (to 40fps instead of 60), so we profiled, found that it was a CPU bottleneck (not related to GPU), made some improvements, and moved over.

Anyway, it seems that we are doing something that kills performance under some configurations. I am guessing it is not CPU (some people with an AMD4000 had problems), but rather some OpenGL feature that is not hw-accelerated on all cards/drivers (some people have suggested that blending modes could be the cause). I am expecting to find out that our performance was killed by putting the score-gauge on the HUD or something like that :-/ .

That said, if you had problems, please let us know your hardware/OS/libraries configuration. If any of you is willing, I would love to have a chat with you trying to turn off different parts of the game to guess what is killing performance. Thanks!