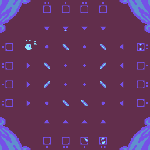 A Pyweek 32 entry by Tee

A game about putting the dancing dead where they belong. Made in one day.

I present you a cool bean award!
Presented by BeefxThief

Danse Macabre is a game where you guide dancing spirits through a maze of mirrors and make sure that they end up at the right exits, according to the type of dancers. The main challenge here is that mirrors flip every time that you hit them.
I normally do postmortems after ratings but I'll just write a bit about how my week went here since it'll be short:
I spent most of the week working on a puzzle game around tessellation, where you would have to construct a tiling and have a certain line wrap around to itself. I had an idea of one interesting level and it felt promising, but Saturday morning I had most of the mechanics implemented and I just couldn't figure out where the depth was, at least with the current set of mechanics. I realized that I wouldn't have time to redesign the mechanics, create levels, and polish the game in the time I had left, so I had to drop it and start over from scratch with a less ambitious idea.
Danse Macabre also went through a surprising number of iterations given the short amount of time. I was insistent in incorporating the theme mechanically rather than aesthetically, so I started off with the idea of bullets that never go away. The constrained positioning was to ensure a consistent bullet pattern and the idea of angled mirrors came because I didn't want the bullets to loop in the same direction. Unsurprisingly, that's a hard one to make work, so in the last few hours I had to drop it and come up with something new. Playing with what I had, I noticed that trying to find out where the bullet would end up was kind of fun, so I decided to jump on that and make that the goal of the game. But that meant losing the "neverending" theme, so I ended up coming up with a background story for the game that fit the theme, which was inspired by the music I had picked and the maze of mirrors. Although I ideally wanted the theme to be in the mechanics, I'm happy with how the theme fit and the final game overall.

Lots of twists and turns in my Pyweek, but I hope you enjoy the game. Let me know if you find any issues. Looking forward to playing your games.