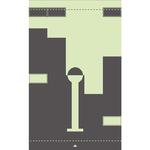 A Pyweek 16 entry by Tee

A simple arcade game where you must not let you stop yourself from reaching your goal.

Those who have played my games know that about half of the time I realize that I can't make things work on the last day, throw everything away and submit something small. It's happened again.

I was motivated by the fact last time I did well within a short time span, but this time even though I had slightly more time than before, I felt uninspired (the name of my game is proof of that). Finding a good idea that is fast to implement is quite hard. I scrapped a game once in the middle of the week and a second time today (although the game I scrapped today is not too unlike the game I submitted). Today I ended up implementing and submitting an idea that was simple enough but not from the top of my list.

I'm not particularly excited about this game, but hopefully it's not too bad. I realized the mechanic I focused on is not that fun after all, and I'm not sure I managed to make it fun. The basic idea is that you shoot both to your side and your enemy's side and you have to be careful not to hit your stuff while hitting the enemies (although in this implementation the context is much simpler).

Anyway, I hope you have fun playing it. :)