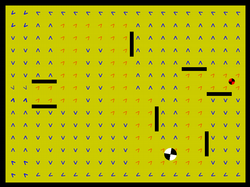 A Pyweek 5 entry by Tigga

Navigate the disk to the end point.

Firstly, thanks to Richard for organising another PyWeek. It was great fun!

Secondly, congratulations to psyduck_revenge. I really liked Wound Up! and had great fun playing it.

Thirdly, thanks to all the other games. There were some that I really liked (and some I didn't like so much...) but given the high drop-out rate (I think roughly half the entries had final sumissions?) just finishing a game is good. Commiserations to any of you who didn't manage to finish.

Finally, I thought I'd go through my comments and reply to some:

I love the idea. I strongly encourage you to expand the game. There are many features you could add, like taking advantage of spinning (to break walls, for example), or manipulating more than one disk. The last level is particularly annoying, though.

I tried the spinning breaking thing but it got a bit hard to control. Multi-disks will work very easily - I'd just have to implement disk-disk collisions. Then I have to think of level ideas...

A nice idea, and really well executed. A little more graphical polish, and maybe a tutorial, and you'd have a seriously solid game on your hands.

I quite like the simplicity of the graphics. I'm not quite sure how I could impove them without reducing the clarity. The first few levels are meant to guide you though in a tutorial like fashion. I might put some hint text on some levels.

This was cool, the music gives it a funny old-school feel. Had a bit of trouble working out how things work after the first few levels when there were field arrows that somehow seemed to be related to the ones I was controlling but not exactly following them. More levels and a record of best times would be nice.

I see where you are coming from with the control issues. It was the best way I could think of showing a fixed and a non-fixed field interacting. I considered timing, but it didn't really fit with my graphical theme. I'll have another look.

This seems a commen problem. I may re-order 10-15 some time in the future, as they jump around in difficulty quite a bit.

I'm realeasing a bugfix/performance tweak version soonish. Doesn't have any added content - just a bit of polish, and a bit of speed.

Thanks again for voting!

There seems to be some sort of PyOpenGL/ctypes/numpy incompatability issue going on which crashes the level selector on a few platforms. There is some sort of type problem with the result of a function returning a numpy array being passed to another function. Odd.

Anyway, a fix for those with problems (thanks elias):


Sorry about this! I blame somebody else...

Only got one full day left. I've got 2 days of work during which I'll only be able to get 2 or 3 hours work done tomorrow and none the day after (going home). Pretty much down to creating levels though (although part of creating levels is creating new features... which can take a while).

Have uploaded a new version.

More levels again. Also a nice funky title screen. I haven't uploaded a file 'cos the one up here at the moment is fairly recent.

In other news, I'm having problems with py2exe again. It seems to disagree with the PyOpenGL call glGenTextures, something I really quite need (so that I can... you guessed it, generate textures!). It might be a result of some slightly hacky things I did to get numpy working, but I don't think so. I'll have another go tomorrow morning when I'm fresh. Might just delete the whole py2exe directory and reapply the numpy fixes to see if that works.

Added a few levels and changed the colours. Next job is to rework some of the physics and collision detection (it doesn't like wall corners at the moment!)

Anywho, uploaded version is playable to level 4. You can use the left and right keys to twist the arrows. Get the black and white disk to the red and black one. Have fun!

After a morning of wandering around my room thinking of ideas I finally settled on something.

The plan is to have a game of seveal levels. Each level consists of a vector field, some power-ups, walls, and the finishing flag, with other obsticals that I think up along the way. The player can control the disk by rotating the vector feild. Some parts can be rotated, while What I currently have is a disk that flies around, with frictional collisions on walls and possiblilty for rotation. I also have a (basic) system in which I can create levels consisting of gravity wells, spinners, walls, and fixed feilds. Tomorrow I plan to create a first test level with a finsihing post and a few walls to see how it goes.

I knew I should have only taken on a 10 week placement this summer (rather than 11!). Looks like I'm not going to be able to spend as much time on this entry as I did on my last... but I do have the benifit of experience this time!

See you all in a few weeks!