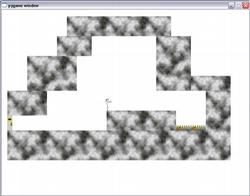 Splades are far more lethal than Sporks. We intend to write a Python game with nothing to do with either.


5% of respondents wished to disqualify the entry.
Respondents: 24

Ooops, seems I forgot to include the source.

Sorry everyone. In the mad dash for submission before the deadline it seems I forgot to include the source code. I apologise for breaking the rules of the challenge and have submitted the source should anyone want to look at it.

Change to Plan B

Unfortunately our first plan was far to epic to attempt in one week, so we had to fall back on a second idea utilising the exact same engine. Here's a completely originial story excerpt:

John Stalvern waited. The lights above him blinked and sparked out of the air. There were robots in the base. He didn't see them, but had expected them now for years. His warnings to Cernel Joson were not listenend to and now it was too late. Far too late for now, anyway.
John was a post-apocalyptic survivor for fourteen years. When he was young he watched the giant machines and he said to dad "I want to fight giant machines daddy."
Dad said "No! You will BE KILL BY ROBOTS"
There was a time when he believed him. Then as he got oldered he stopped. But now in the bunker base he knew there were robots.
"This is Joson" the radio crackered. "You must fight the robots!" So John gotted his shootgun and blew up the wall.
"HE GOING TO KILL US" said the robots
"I will shoot at him" said the cyberrobot and he fired the rocket missiles. John shooted at him and tried to blew him up. But then the ceiling fell and they were trapped and not able to kill.
"No! I must kill the robots" he shouted
The radio said "No, John. You are the robots"
And then John was a cyborg.

Today Tinman and I began discussing the concept behind our game. We decided to attempt something along the lines of a 2d platformer equivelent of a level from Shadow of the Colossus set in a post apocalyptic wasteland with a giant robot, sorry "A Really Big KILLER ROBOT!", hopefully portraying a similar empty but epic feel.

As you can see from the uploaded concept art of mine I have absolutely no graphical skill so we decided to follow a minimalist style for visuals to avoid serious ugliness.

Tonight I will be writing the first version of the level editor as well as beginning composition of some of the music (my favourite bit). Tinman will be writing most of the engine code because of his games development experience, while I'll probably do most of the UI stuff.