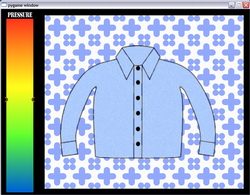 My oh-so-masculine game is starting to take shape...

A Pyweek 2 entry by SimRex

This project will be a one-man effort by a Python scripter who cut his teeth in the Bridge Commander community. Expect things to go wrong. Very wrong.

Hello from a first-timer!

This is my first time in any kind of programming competition, but I've been dabbling with Pygame for quite a while now, and I'm a long-standing Python scripter from the Star Trek: Bridge Commander community.

For this competition, I'm going to be a one-man-band, doing everything from the coding to the art to the music and sound effects, which probably means I'm going to fail miserably, but at least I can't drag anyone else down with me!

Anyway, enough blathering from me until the competition starts properly, I think! ;)

After numerous delays due to Mother's Day and a random cold, I'm now off the start line... One section of my game is nearing a useable state - this section requires the player to maintain steam pressure at a suitable level, guided by a guage on the left of the screen.

Now I just need to work out what the steam pressure is actually going to be used for to turn this into a game! :-\ Still, progress in a random direction is surely better than no progress!

Just posted a screenshot showing some progress at last! I've decided that my game is going to be based around the idea of ironing clothes. Apologies if anyone was already doing this, but with one thing and another I've not been able to keep up with what everyone else is doing as much as I'd have liked.

The next problem I'm going to have is finding a way to add wrinkles to my shirt... I think I might be having a look at the bump mapping example in the Pygame Code Repository!

Well, it had to happen sooner or later, but maybe if I post about it someone will know a way around this...

Basically, my game involves ironing, so I have two images - one of a shirt with rumples, one without.

Graphically, the most effective way of pulling this off *seemed* to be blitting the uncreased image over the creased image under the mouse cursor, so I've set off down this route. Now, I've reached the point where I need to find some way to compare the working image with the uncreased image, to see if the user has finished their ironing yet.

I've just spent most of the evening trawling through the surfarray and Numeric docs looking for anything that might let me do this, and while I've found a few good possibilities (such as Numeric.equal(a,b)) it still doesn't seem to work.

I'm hoping that there's either something obvious that I've missed, or something clever that someone knows, otherwise I'll have to code up a new system, in which case I'll probably not get my coding done by the end of the competition... Help!

I'm (hopefully) uploading my final submission now, with 7 minutes to go according to the main page... A py2exe'd version will follow.

As I didn't have time to dig up an appropriate licence, and I doubt anyone would be mad enough to want to crib a beginner's code, I'm considering this software to be Public Domain. Maybe it'll come in handy for teaching people how not to code well ;)

Anyway, I'd just like to say, this has been a blast! Many thanks to Richard for running a great contest, and I'm looking forward to playing everyone's games! Good luck!