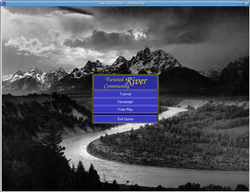 A Pyweek 5 entry by Alya

Your twisted god sends you along a twisted quest to take a few twisted people and settle along a twisted river. Can you fulfill your destiny or will you cause everybody to starve?

A city-builder game set along a unnaturally winding river, with crazy villagers and a god who would love to see you fail.


0% of respondents wished to disqualify the entry.
Respondents: 29

I've decided to go with a city-builder game in pygame.draw this time. Twisted was my least favorite theme for that. :-/

In the game, you settle a city on a twisted river (which likes to get in the way of city planning :-)). At the moment, your villagers will construct buildings, gather wood and food, eat and hang around their houses when they've nothing to do.

Eventually, I hope to have a campaign of scenarios in which you need to fulfill the wishes of a twisted god.

What I did so far:

Day 1 was mostly about implementing UI stuff and the basic map and building model.

Today, I extended the villagers and buildings, put in construction jobs and an UI to place buildings. I also wrote a short tutorial scenario for the stuff that's in so far.

That means, this revision is kinda playable now :-)

There's still a lot missing. On the todo list are:

I have no clue how much of that I'll manage to put in...

I've removed scrollable maps and saving and loading (my arch-enemies; I couldn't get them to work in time the last time either :-() from my todo-list and finished everything else except the campaign and balancing.

There's a new revision up.

The "Free Play"-scenario. All buildings here are fully functional. :-)