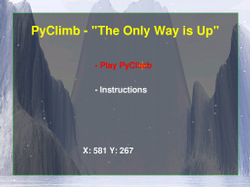 You are a special forces operative in a rival foreign country. Your country's spy satellite was unexpectedly shot down, and has crashed and is burning on a mountain. The satellite's hard drive contains very sensitive information and needs to be retreived. The country is aware of this situation and have been unable to send a helicopter to the crash site because of heavy snowfall. The only way up is to scale a vertical glacier. They have sent a few men who lack climbing supplies and may shoot at you from the ground. Once at the top, the USS Poly will send a few helicopters and support aircraft to extract you when the weather clears out. Good Luck. Oh yeah, and the burning satellite and the vibrations of the impact is causing a few boulders to melt and fall, they shouldn't pose too much of a problem....


Tools of the trade: (I was forced to use these tools) Other:


Well that's all I have to say tonight. Time to get onto other things ;)

Well, I've got only a few hours left to work on the game. And I've decided to make an impressive looking menu and opening screen, which will hopefully give a good first impression...

The is one of the backgrounds for the menu:

Well, I discovered that a major part of the problem was due to looping through the # of bullets and blitting them every loop. This resulted in a drop of 7fps. I'll go fix it by having it draw when truly necessary, and hopefully it will up the fps to 33fps.

With this in mind, I don't think I can finish adding enemies or items. I guess I'll have to cut my losses and stick with what I have... climbing a glacier and shooting at icy boulders falling down ;-).

My development is being interrupted by life and I won't have enough time to add extra features in during the next two days. I'll just make a very cool menu with a fancy ui, tweak the graphics, and do other small optimizations. The game is highly configurable at this point, and I think this will contribute to its fun factor :-)

About two days ago, I had these two goals.. I don't think I could meet them now...
# AI and enemies
# Item drop
The reason is this: when I added in the Item Drop feature, I realized that the game's fps rate fell below 10fps. The result was a choppy mess. Currently I'm using a simple loop - handle input, do logic calculations, draw, and cleanup. Apparently the logic portion is taking up too much time. If anyone has suggestions for optimizations or a better method altogether, please comment...

Just a random thought while I was programming: Hopefully pyweek.org will not be slashdotted any time soon, or else this competition would be ruined due to the Slashdot Effect- pyweek would most likely be knocked offline by all those visits for about a day; if pyweek is slashdotted on the last day, no one would be able to upload their submissions :-(

Posted yesterday...
>>Things to do tomorrow:

I'll do the enemy units and their AI tomorrow, along with items, and better pics :D

grr.. I've been wasting time doing other things.
I've just rewritten the gun sound system.. that's only for the handgun.
I'll have to do it for the AK-47.
I guess I'll add some snow and post a screenshot.

Things I got done today:
Things to do tomorrow:

Also, I realize that I'm about a 1/3 done with the game.. with about 5 days left.. I don't know if that's a good thing or not; it could be that I had chosen a very simple idea, but it gives me extra time to polish the horrible graphics :).

I've spent too much time on the menu, now I have abandoned efforts on the meny and started on the game...

I have found all the sounds I need for the game from http://findsounds.com/

I'm a horrible artist, but I'll have to start the preliminary art in this game first...