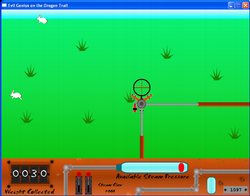 This is my first entry into a competition. Relatively new to python, but I'll see what I can do...

Ok, the game is finally done and I've uploaded my first copies of my final submissions. It's only been tested on Windows with pygame, but I see no reason why it souldnt' work on Linux. It doesn't work on my Debian Sarge, but that's because the Debian pygame package is ancient.

Anyone want to test it?

Looks like I've completed the game engine at this point. The game now sports a lame menu system, level transitions, and win/lose screens. I also added some snazzy, simple steam effects. All that remains at this point are sound effects and a whole pile of artwork necessary for the levels. Quite frankly, I'm shocked at how easily a relatively complex game can be built in pygame!

Ok, my first screenshot is uploaded since I finished the first animated animal last night. The player needs to use the steam-powered claw to capture things runnign across the screen. A bit simplistic, but what are you gonna do?

I still need to add in some interesting characters to run across the screen, but the bulk of the game engine is complete. It still needs sound (which I've never done before) and menus/levels, which shouldn't be too hard.

I think I went down the right track keeping this game so simple. I should be able to actually finish!

Well, after a few hours I have a working title and a preliminary design:

Evil Genius on the Oregon Trail


It's a bit long, but it gets the idea across. I plan to have a screenshot by the day's end today of the preliminary layout. I'm most concerned about creating menus, level transitions, and sound, so the game engine needs to be done quick.