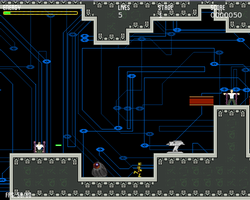 Robolts is a MegaMan style platformer, in which you play as a robot who saves the world from the clutches of alien forces.

Well, for barely three days into the compo we're really making progress! So far we have a gorgeous running animation of the robot, multiple scrolling backgrounds, platform collisions, and a really nice tile engine. Next up is some weapons and badguys :)

Well this is our last and final entry. We had a lot of stress in the end but enjoyed the PyWeek compo and that's matters! Congratulations and good luck to everyone!

Well, the game was posted with a little known issue. Final boss has 1 hp... YES! just ONE hp... hehehe. You'll kill him without any effort indeed. You can fix this bug changing boss hp in enemies.py file, line 420 and replacing "1" by "30". That's it. Have fun