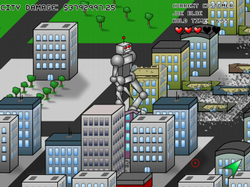 Jazaian (ja-ZAI-an): Sumerian demigoddess, daughter of the supreme goddess Ishtar, from her brief union with the mortal king Gilgamesh. She is considered to preside over the emotions of urgency and impatience, making her name an appropriate choice for a team in a time-limited contest.


18% respondents marked the game as not working.
Respondents: 18

Here is a rough outline of some future plans for Customer Service ROBOT!

Also, nobody has reported any further information about the crashes on Windows. I hope that means that we already solved them in the last update ;)

Thank you to everyone who played and voted! I really appreciated the feedback given by most of the voters. Lots of compliments for the art-style, so extra kudos go to our lean-mean-art-producing-machine Zach.

I have uploaded a re-release with a few post-pyweek improvements. I do plan to continue development on this game. Suggestions for increasing the dept of gameplay would be greatly appreciated.

Also, a few of you had problems with "pygame parachute" crashes on Windows. We haven't been able reproduce these crashes ourselves, but we would greatly appreciate it if anyone who can would let us know, so hopefully we can figure out why it happens.

Here are the new features in the post-pyweek re-release:

Oh, yes, and in response to your questions, no, it does not matter whether or not you smash buildings. The important part is EXCELLENT CUSTOMER SERVICE!

For what it is worth, here is a screenshot

Maybe we were too late :(

I can't find the file upload button anymore, so I guess we were too late :(

Well, if you want to play anyway, you can download the source here: pyweek-jazaian-robot-src.tar.gz. it requires pygame, pyopengl, and motherhamster. wxpython is optional for those who want to use the editor.

For those of you too lazy to separately install motherhamster, here is a copy with it bundled in: pyweek-jazaian-robot-src+motherhamster.tar.gz

Things are going well! It is something of a joy to be given license to focus so much energy on a game-making project. Yay for programming!

Some additional information could theoretically be found on this wiki page

And remember! When you say ROBOT!, the "!" is not optional!