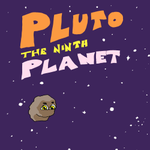 "we lost the lion"

This is the first game of Forked Tail team.
Game talks about Pluto, that has been considered the Solar System's ninth planet from its discovery (1930) until 2006, when it has been downgrade to "dwarf planet".
Pluto is not agree with this decision, and he challanges other planets within Solar System to show he is worthy of being a real planet. The challanges are based on planets main quality (speed of Mercury, charm of Venus, greenery of Earth, etc..).


Original project included a final level challanging the Sun, but unfortunately we didn't have time to complete it.
Enjoy the game!

Note: an unexpected supporter is secretly pulling for Pluto's crusade. Did you find it? It is very close to us...

Very Loosely Based on a True Story
Presented by Cosmologicon

Well, this was our first pyweek as a team, and we are pretty happy of the game we built-up, even if it still needs lot of improvements.
Most of them are from the code point of view... some levels were quickly written down without a strong idea on the paper and this is the result. Fortunately our artist made amazing artwork and the game looks very nice. And thanks to our musician the game has great background tune. We'll add for sure some sound effects in the future.

Happy to read all your comments. Here the replies:
Regarding the long loading time you raised, at the moment original files are quite big and there are some "blank frames". The game is loading all of them and scaling images at startup... probaibly we can have some improvement by resizing the original images and removing blank frames.

At the moment I'm not clear with the "freeze" between the story and the game start, according to me the game should not do anything particular at that stage. As stated by someone of you, maybe the game have some memory leaks... maybe it is something related to the image blitting or frame management... I'm not very experienced so I'll review the code and I'll compare it with yours to understand what is wrong.

For all the people that found the game frustrating, not winnable or with unclear targets... I'm sorry, our first error was to think that a minigame-based game would be easy to code... obviously we were totally wrong, we had to fight with 9 simple but different small games. As result, most of them are buggy. And the worst consequence of this point is that our "Fun" rating has been dropped down.
Personally speaking "Fun" was our primary goal... we learned the lesson.

Here some hints to walk through the game bugs...
Mercury: just press Z and M keys alternately ro run. I hope nobody had problems with this game.
Venus: move with arrow keys and collect asteroids to beat Venus' weigth. If timer reach 1 minute, you lose. Note: I was unsure about limiting movements to the screen border... at the end I choose to let people get lost outside from the screen... don't know if I'll confirm this choice in the next release
Earth: my favorite level, moving your mouse (no clicks are needed) you have to drag seeds on your surfaces and asteroids on earth's one. win condition is you>=90% AND earth<=10%. Lose condition are you=0% OR earth=100% OR timer reach 1 minute. Hope lot of people noticed what happens when you click on the moon ;)
Mars: press the keys showed in the sequence on the bottom left of the screen. If you miss a key or you do not press any key for a while, you lose a life. If you hit 5 keys in a sequence, Mars lose a life. Maybe we'll change this gameplay removing key sequences... don't know at the moment.
Jupiter: unfinished level... Original idea was to keep pressed mouse key to blow yourself (but without exploding) and then compare your size with Jupiter's one. Then I hadn't time to code so as workaround the only way to beat this game is to click, after the "blowing" phase, on that crater of Jupiter that looks like a cork. You should see him deflating (but animation doesn't work). As result you are bigger than him and you win. We'll see what to do with this level.
Saturn: I had problems in coding also the original idea for this level. As workaround, at this moment you have only to follow Saturn's instructions and <strike>type</strike> find his RING... This quick solution has been choosen in order to not waste all the animations of Saturn made without the rings. Unfortunately the font we used in the game is all uppercase, so the RING word is not enhanced as wanted :(. We'll change the font for sure.
Uranus: move your mouse and find uranus, then click. Do it 3 times. Unfortunately the frame management need some improvements, so some animations like Uranus' catch are wasted. And please do not move the mouse too fast otherwise you'll cheat :)
Neptune: Lot of bugs here... once you collect a snowflake (no click is needed) you should shake your mouse until a snowball is made (and Pluto should automatically raise the arm aiming to Neptune to confirm this). Now you should drag the snowball on your picture and pluto should shoot to neptune. You should do this 3 times. As you see I used a lot of "should". Maybe you can succeed avoiding any collision with asteroids and further snowflakes... but I can't assure you.
Sun: We planned a final boss level against the Sun, but it has not been coded at all, I had't enough time... there are just some images of sun in the data folder.

So... probabily for a while we will not have time to work on the game and fix all the bugs, but would be nice to complete it e.g. for next pyggy competition.
For people interested, we'll let you know if new release of the game will be available.

Thanks to all.
Thanks for your games.