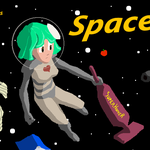 The game is about a dustgirl working on the Earth-Moon route.
But the Moon is gone, so she has to recycle garbages collecting the lunar dust to build it up again.


Howto:
1.Collect garbages in the space with your ship.
2.Grab with the girl and put them in the correct recycle box. Every correctly rycicled garbage gives you some lunar dust.
3.Once dust is 100% (the red number) go to Earth and take one piece of moon.
4.Take the piece of moon to the Moon.
5.Do it 3 times to rebuild the Moon.


Hints:
-ship movements are reflected on things inside it
-if dustgirl gets out of the ship try to re-catch her before she goes out of the screen
-if you recycle wrong, you fill the recycle box but you don't get any lunar dust
-you can't recycle if the box is full. go to the Earth to empty it
-pay attention when bouncing on asteroids
-avoid alines, they will try to steal your lunar dust. if tehy get into the ship you can still recycle them
-forgive us for unconfortable control keys

GNU Emacs Seal of Approval: this game requires ten fingers to be played
Presented by reidrac


2% of respondents wished to disqualify the entry.
Respondents: 17

First day is gone and nothing has been written. And we hadn't time to meet and talk about the game yet.
Just a copule of mails with rough ideas. Hope to find the good one by today.
At least, not having anything to code yet, I have time to write this diary entry.

4th day is gone and we have a rougly playable thing. Not a game yet.
We also agrees a story: game is about lunar dustman, or better a dustgirl.
You move your ship along the earth-moon route, recycling garbages and maybe collecting treasures.
And there will be also asteroids and aliens.

We are close to the end but still have fix many little things.
The game is pretty done, the biggest doubt I have is about the controls.
Right now you need both the hands on the keyboard... I don't like it.
I'll reserve some time tomorrow to try different approach with the mouse.