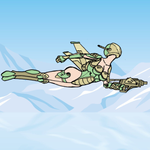 Final version of the hero

The Cicada Of Antarctica

Somewhere above the Antarctic Circle there is Saint Etienne lab, where an experimental machine has been built to retrieve energy from the light dispersion.

This machine is able to break light up into its spectral components by using a special dispersive prism, and then routes the "colors" into three huge rings placed on the top of the lab, collecting the released energy.
Dr. Pheega Da Keelo, the lab's leader, suddently discovers some anomalies and finds that some maintenace drones of the first ring are not working fine. So she decides to wear her special suit and enters into the ring to fix the issue.

Once her work is completed, she discover that the root cause of the issue was the evil color-blind Zontar, who is going to sent his henchmen also in the remaining two rings.
Will Pheega succeed in destroing all the villans, fight against Zontar and finally save the world from a messed up colors destiny?


Known issue:
-heavy game
-missing music
-all the "death" animation wasted since the game is deleting the object immediately


6% respondents marked the game as not working.
Respondents: 15

While thinking about possible games, here are some sketches of possible main character for every theme:

We had only a vague idea for the Mad Science theme, so we spent the day in finding something more deeper and at the end we found something we like.
We decided to play with colors, probabily having a bad guy threatening the earth.
On the opposite side a wonderful girl trying to save us, of course.

Here is our hero:

final, but still needs some music and colored arts

So we submitted our entry last night.
It can be consiedered final except for some arts that are still B/W. Artists in our team did a great work but hadn't time yet to put color on some drawings. Hope we will be able to show you all of them complete.
Second missing at this moment is the music, game is ready to use it but I didn't received yet the music file from our musician. Again, hope we'll encolse the mp3 file in our next final-final entry.

We just loaded a new version with some polished arts.
Unfortunately music is still missing, but the worst is that all the "death" animation of the anamies are wasted since the game is deleting the object immediately. My fault.
The game looks quite heavy and doesn't run very fast of some machines... probabily my fault, again.
So... play the game and post your feedback.
tnx

This morning i was surprising for the bad rating and one comment.

I don't know why we recived so low rating, compared to “pluto the ninth planet” and “camouflage” the game is more complete, but clearly we made some mistakes. “... I really object to the sexual objectification of the female
lead, starting with the picture of her bum in the intro sequence. It felt gratuitous and
exploitative, and definitely not cool.”

The opening comic is a comic and in the comics there are often sexual references. I created Pheega with the help of Milo Manara comics, these comics are full of sexual picture but I don't belive he depicts the women like objects, the female character of Milo Manara are always strong and indipendent, like Pheega. Besides I like the female body and I enjoyed drawing this scene. If you consider this picture exploitative you must consider the cute animals, cultural references and more exploitative too: they are all potential way of win the others over. In any case we do the games because we like doing them and because the peole appreciate them. If someone appreciates the butt of pheega my purpose is reached.

If I like drawing in this way I will not censor myself for possible misunderstanding due to wrong point of view.

“Only the self-censorship is worse then the censorship” Andrea Pazienza (1956-1988).

Sorry for my english.