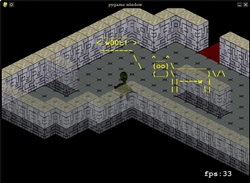 I guess it's time for sleeping..

My dog ate my homework

A Pyweek 3 entry by gly

Most of the day I rewrote a large part of the tile rendering. I did try to optimize some rendering without any success, but I found out that 3200x1200 is no good even for windowed OpenGL-apps with my video card.

New bugs:
Oops, didn't see this problem with alpha and rendering order before. I need to render some stuff in correct order. I know how to do it, but I need to sleep now. There's also a slight coordinate confusion..

Time:
No music or sounds done. To few models for the my idea.. I'll guess I will have to be creative.

Coding:
Rewrote and cleaned a large part of the code and added the basic framework for animated objects.
TODO: Nice input, introduce the World object, rewrite and optimize rendering, level generation (don't know if I'm going for computer generated or not yet)

Art:
Did an alien with a gun today. Learnt how to do a basic walk cycle.

Time:
I'm kind of short of time, I might have to skip or take it easy on the party tomorrow night :/ At least I have two models now, in case of extreme shortage of time it should be possible to make a game with only those ;)

Coding:
Rendering of the world/maze/arena works pretty well. Some optimations are needed though. The rotational menu system works but needs polishing. Main.py is mostly a test program and thus a mess so I will make a nice class out of the game. Then I can write some code for the characters.

Design:
I've decided about the game now. It'll be an adventure/action game taking place in an alien building of some sort. Preliminary story is: My dog ate my homework. My first idea about level design was generating them randomly from a couple of rules. I haven't thought anything more about that yet.

Art:
I've modelled a spider and rigged it with armatures. The first thing I did was an attack action, whitch wasn't to hard. But creating a walkcycle for it was slightly harder, so I postponed that for tomorrow. To make the game look like anything that's done I'll have to create, one or two aliens, a couple of droids, some props and of course the hero. I'm mostly worried about the living stuff..

Music:
Nothing done yet. Will start tomorrow.

Time:
Not to worried yet, I like tight deadlines.

I've come up with two (completely unrealistic) game ideas. Both would share most of the base code. So let's get started..


Sun:
-Learn pygame ;)
-Make something show up on the screen

Mon:
-Nothing (school all day)

Thu:
- Nothing (school all day, then some pubs)