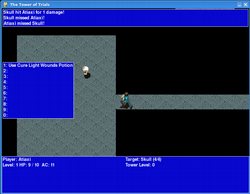 This time, it's personal

This is my tentative title for my game. You start at the bottom of the Tower to Heaven to begin the trial of ascension. Once you've entered the tower, the only way... is up!

I'm giving myself breaks when I hit certain milestones. Today's first break milestone was getting the tile engine working. Now, it is! Today's goal is to have the player be able to walk all over the map. This means loading the map from a file, designating certain areas as walk/don't walk, and centering the tilemap on the player.

Though technically I suppose it's day 3. Anyway, I've got the tile engine pretty much done. Player stats and leveling is pretty simplistic, but also done. I've even got an enemy, but there's no combat so the worst he can do is chase you around. Combat tomorrow!

I forget what day this is. Combat's complete, more or less. Enemies vanish when they die, and there's no clue you're fighting except for the HP drain, but that's fancy stuff that can wait for later while I work on core functionality. I've also got an inventory screen and the ability to equip weapons. Tomorrow: Loot, health potions.

At work today I made a prioritized list of things I need to do. I'm listing it here for reference:

Everything above the line are things I consider critical to even play the game. I've already worked on some of them, but none are complete. I've got two options at this point: Give up in the face of overwhelming adversity, or

You can probably guess which one I'm trying :)

Please help make sure this works

I just uploaded what I have so far of my game. You have infinite health potions, so it's not really a challenge, but still. If anyone's not busy (ha ha) I'd just like to see if it works on your systems.

My list from the last entry, modified to indicate what I've accomplished: