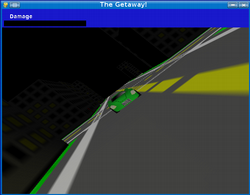 It's actually just me, Atiaxi.

I got 12th out of 15, which is right around where I expected what with the wonky collision response :) I've fixed it to look faaaar better, though, and dialed down the rate at which you can die.

After this, I'll probably be moving all my development to Sourceforge. There's lots of stuff I'd like to do. I had a lot of comments on how the chase camera mode was the most fun, which is neat considering I just threw it in as a lark :)

It's actual in that you can play it and now win or lose. There's no fanfare right now, just a text dump of "Victory" or "Failure", but it works!

My collision detection with the environment is near-perfect. The player doesn't (usually) get stuck in the geometry, and the bounce effect works well.

The collision with other cars, though... not so much. It just makes a bounding sphere that's a bit too big. The cars don't respond as well while they're in motion. It looks kinda tacky. But it works, and if I decrease the amount of cops so the player's not swamped with them it won't be so bad.

The difference between two angles

Given you're at angle X, and you want to be at angle Y, which way do you turn?

Happily, the kind folks on #pyweek were willing to help me out. For future reference, the answer is: Make a vector facing angle X and a vector facing angle Y. Take the cross product and look at the sign of the Z term (assuming X and Y are in the X-Y plane!) - this tells you which way to turn.

I got that working and have thus uploaded a screenshot of 10 cops and 1 robber (i.e. you). Happily those white dots on the field are their waypoints, and they're chasing them and not you.

I decided to make my game 3D, and now I don't even remember why. Initially I was against the idea, mainly because I thought it would be too complicated.

Turns out, the 3d stuff has been easy as pie. Physics has been handing my ass to me, though. Who'd have thought car physics would be so hard? I can't seem to get turning right, so I'm faking it; each frame, a portion of your current velocity is transferred to the way you're heading. It's not realistic, but it looks good!

I uploaded a screenshot where you can see my mad OBJ-loading skills. That red car was downloaded from the internet!

After having discovered that my idea had already been thought up, I'm registering my new idea here so I can say I thought of it first :)

The concept: Bank Robbery! You've just pulled off a daring robbery and now have to escape the police. Lose them, and make it to the safehouse! Top-down GTA1/2 style gameplay, but without all the stealing of cars or splatting of pedestrians. You've committed enough felonies for one day :)