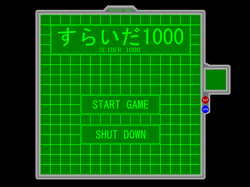 Neko-Chan is bored. Nothing exciting is going on and it seems this won't change for the rest of the day. But luckily, OneNeko-Chan has this imported sliding puzzle in her magical box of occupation!

Help Neko-Chan and Oneneko-chan to master this colour-twisting board of time-consumption.

Yeah, Pyweek 5 is over and it's time to put all those impressions and thoughts together to make a delicious readable post-mortem sandwich. Congrats to the winning teams - we really enjoyed Wound Up! and Diskfield.

Statistically our new game is 0.3 points less fun than our last entry, while innovation and production have improved by 0.3 and 0.4 points. Which doesn't mean much. I'm just happy that we're somewhere in the middle of the table and that the game worked for everyone who tried. Thanks to all who took the time to play and rate our little Slider. And kudos to the one who found the easter egg! Raorrrr!! ;)

What went wrong: We didn't have a decent game idea for all themes. That was pretty stupid.. And I'm still slow at coding and had to drop some features. Zahme had to go to work during the day but luckily our game wasn't so graphics intensive.

What went right: Zahme really improved his pixeling skills. I bet he can pixel an armed Tyger within an hour now. With boots! And I.. uh.. I can do a little music with Chibitracker. Additionally, we submitted a working final and I'm quite happy about the look and the "mood" of the game. It's not really original and I wouldn't play it for ages but it's nice enough.. I guess it's the graphics and the would-be Japanese look that makes you stay for a few minutes. ^^

Next time: Next time we will think of good game ideas for all themes. We'll have a sample collection (so I won't have to hunt them down during the week) and more knowledge about Chibitracker. Zahme wants to learn more about mtpaint because M$ Paint isn't that comfortable. I guess I'll replace pygsear with a maintained library (pgu? pyglibs?) that takes care of all the stuff I don't care about. Maybe we'll bring in a third person that takes care of cooking and testing.. And next time Zahme can do Katakana, too.

A Slider 1000 final should at least include:

See you all next time and big "Thank you!" to Richard for hosting Pyweek! :)

Ok, we had to cut some features and there are still some small bugs but I'll probably break the game trying to fix or add new features. I just hope that the thing we've just uploaded works. ^^

I guess the Pyweek server will be happy about our early submission, too. Nice server.. *pet*

I finished some graphics for the game (the board now surely is done from the graphical perspective).

Serval added the functionality to the second button and started working on the editor. The editor even works for creating simple 5x5 Levels - so we are definitely on track! :D

But we will not finish today as predicted earlier by me... As currently the ideas for our game are just "flowing" - currently we have more ideas and concepts than we probably will be able to implement in the game, but still we will try to get as many as possible in it :)

ToDo for the next days:

Code:
- Completing the Editor
- Including one remaining animation
- adding a small feature to the level loading code
- Setting up title-screen and incorporating functionality
- Scripting the Intro sequence

As small bonus to our today's daily status-report, we just briefly direct you to this completely mysterious and not very descriptive labeled link:

A completely mysterious and not very descriptive labeled link

We are pretty on schedule for this challenge. The basic game concept is working, basic graphic set is also done.

I guess my estimation "We will be done on Tuesday" was a bit too optimistic - we found a lot of things we could add to this game [and I forgot, that I have to get to work every day - and thus have not that much time for graphics as I thought first ^^]

ToDo on graphics:
- Title Screen
- Menu-Buttons
- Intro-Graphics
- hidden mysterious extra-image (This one will probably take a while...)

The list may grow as we process - even if our idea is very very simplistic, we are still finding some new things that could be added.

PyWeek 5 - We will really finish this time.

"Twisted".. *cough* . This was not what we had expected at all, this was the least preferred choice.
We had ideas for every theme (i.e. 5 different game ideas), but the idea for "Twisted" was more like an "We take this idea so that we have *SOMETHING* at least as idea for this theme" - bleh. >.<

After we knew the theme would be "Twisted" our idea looked a lot more lame than it already looked before, so we needed to start over with a new idea.

Sooo... after getting a nap (Themes were announced 2 am in the morning here..) we came up with an idea, but don't expect to much. The way it currently looks like, we could even FINISH this idea until... dunno... Tuesday?

Well, after all we then have plenty of time to make more out of this game OR even develop a better and more innovative game idea...

PyWeek 5 - We will finish this time!