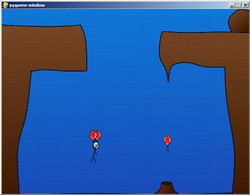 Good shake. Perfect shake. Single pump, not too hard. You know, doesn't have to prove anything, but, you know, firm enough to know he was there.

Ran out of time

We were working on the game right down to the wire. The website was so busy we ended up submitting an MD5 of the final zip to Richard when the deadline rolled over (and now I've finally uploaded that zip file).

There's so much unfinished, but oh well. It was fun! Richard, thanks for running PyWeek again.

The game play is simple. Collect enough balloons to float, and escape out the top of the level. Left and right cursor keys to move, and space to drop a balloon.

Oh, and there's a development tool/cheat left in and enabled--press up to add a balloon to your bunch. It's not intended to be part of the final gameplay.

The final zip includes music, but due to the rush I left the pygame.mixer.music.play() line commented out, so you won't hear the music. :-/ There are three levels included, but only the first two are properly debugged. The third and final level might not be beatable without cheating.