A last-minute sink or swim entry by Davy Mitchell who's Python is decidely rustly. Onwards!

I awoke to an unexpected choice of theme. Personally I was hoping for Cannine and had a few doggy themed things lined up in my head. First thoughts were around WW requiring some fancy physics which I don't have time to get into (even with a library). So onto Google for some inspiration, turns out Wibbly Wobbly has water connotations - there is even a pub called Wibbly Wobbly that is in a barge.

The idea I have settled on for now is based on the Wibbly Wobbly bridge over the Thames in London.
http://www.copyright-free-pictures.org.uk/london-england/47-wibbly-wobbly-bridge.htm
So today wil be an ideas day mostly due to other commitments but I think it can be done in a week! 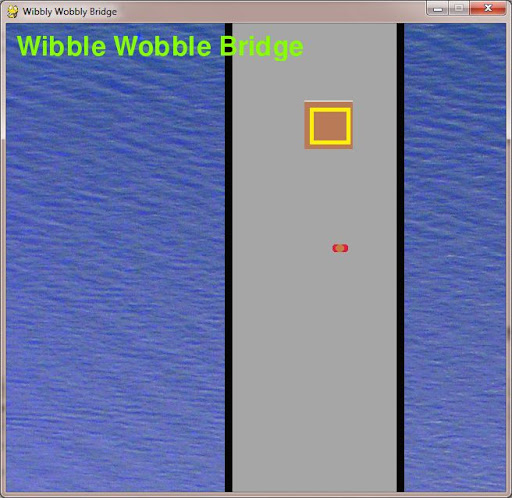 In summary, spent some time reminding myself how PyGame works and getting something simple going.

In detail, the first thing to do was to get the bridge over some water. The bridge swings continually from side to side on the screen currently in a regular pattern. Next was to add the player - overhead view of a person (okay the red blob with a brown blob on top!). Player movement was added (keyboard only) and the motion of the bridge slides the 'Man' about too. Finally I added a crate which you really don't want to bump into.

So that's the game - a  shakey bridge where you collect treasure and avoid objects. Simples!

All this in a little time. Don't think it will win any award but hopeful something complete will come out of it :-) Looking ahead we need some more interesting objects and some treature. Could do with some better graphics. Any ideas for sources? Looking forward to mixing some music up for the game. Now sleep... 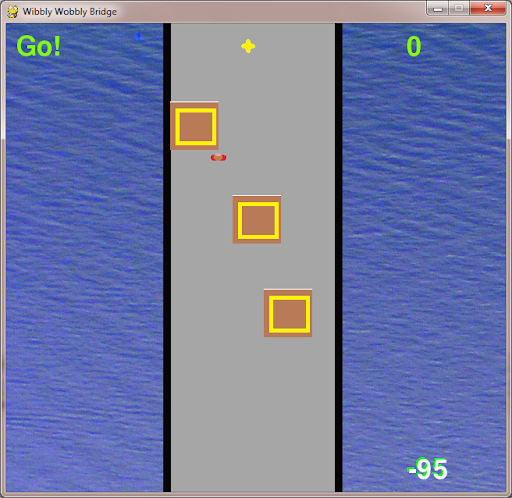 Main task has been collision detection so the man doesn't walk 'under' the crates yet the game has to detect bumping into them. Some progress made in reorganising code and structuring for levels. Thanks to those guys who took the time to reply to my sprites query on the message board - YOU ROCK!!

Tomorrow I would like to add a title screen, a game over screen and some sort of moving obstacle. The rest of the time will be audio, refinements and progressing levels.

Progress slowed after the initial burst but this is fair enough due to less time and more complex tasks. Hope your game is going well!

On Friday night I got stuck into Level coding and completing the 2 moving obstacles. After brewing the coffee this morning I got back to creating the target of 40 levels. I hope it is not too hard a game.

Sound and music will have to wait until tonight. Doubt I have time to add more ways to score points and gain health points this version :-( Right time to add Game Over screen before making more tea and coffee...

Wahoo! All over for 'the game'. Loved doing the challenge and will do it again :-) BTW I am here because of the little bit of Python Podcast inspired me into it!!!!

Here's the + and -'s from the experience - personal and technical.

Positives:
Negatives
Looking forward to some feedback from the crowd. No award winner but hope you have some fun playing with it.