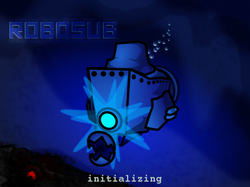 Robotic Sub Research game. Science is fun, and so is pygame!

Thanks so much for all the great feedback on the ratings! I know this game didn't turn out to be "fun" (seriously, i thought it was unbelievably boring too!), but i am glad the important part, my attempt to capture the atmosphere, got through! What a fun pyweek. I wish my Ludum Dare piece was coming together as well, but i seemed to have been distracted by real world fun, and responsiblities. See everyone next time around! And next time i will spend more time on fun!

Added alot of polish to my pygame 1.7 version. Pyglet version was floundering and is disabled in the source. Check out my final version! Occasionally the trench walls render to a weird flat wall with jitters, but usually its aok (hold "d" to see a snapshot). Added my music loops and some in game help. And made this awesome intro screen!

As I have a marathon training run early tomorrow morning, I might not get to put a couple finishing touches on it before the deadline (I am on west coast USA), but i feel satisified with what I managed to produce, and I hope all of you with pygame 1.7 or above will download it and try it out. It may not be the most exciting game, but I think it was a delight to build!

I decided last night to make a stab at porting my organic mess over from pygame to pyglet to take advantage of GL's high speed blending. It took several hours, and I am still deep in the woods, but I can already see how amazingly fast (and now capable of going fullscreen on something less than Deep Blue) this will potentially be. The sad part, though, is that I am losing time that otherwise would go to improved gameplay and features.. but in truth, I feel a critical part of making this game as intense as it could be is providing a game that can be played fullscreen, and have all the blending capabilities.

I will be posting the pygame 1.7 version at some point, and then hopefully (if i get out of the woods) the pyglet version! Until then, here are some links to some music loops I made in garage band during the week for various moments in the game.


Not convinced on the last one (a bit too 80s dance party, not stressful enough), but time is tight for more composing!

Got the game code in there now, so the little scoop up front will snag the visually appropriate samples (reddish dots) on the trench wall, which will load up (lower left hand bar) til its full, at which point you have to bring back to the surface research ship. Also added battery power, which runs down as you use thrusters and the light in the deep, which adds to the existing hull damage meter. Also added "signal strength", a wifi type meter that shows you how your connection is to the research vessel. As this runs down you start to lose control of your sub, but thats where the most fascinating samples lie! All in all the game is really shaping up.. eeeexcept, i am really pushing pygame's blitting to the limit. This thing hogs memory and cpu on my core2duo laptop. I might need to do an emergency port to pyglet to take advantage of opengl soon, but i am putting it off until I have the whole game wrapped up. Its just too much fun hacking this thing together!

Drew a nicer sub in inkscape (heavily influenced by Alvin of Titanic lore), added undersea currents (in the way of shifting particles), thx to RB[0] on #pyweek for that idea! Collision with the trench wall is working, as well as sub damage when you hit it, and scientific samples (red dots) nicely scatter with a bias for the deep. Add to that some nicely scrolling gauges on the side to show depth and velocity, and it is starting to look niiice. Ok, probably should make gameplay (collecting of samples) next, as well as loss of control of the sub as you get deeper. Also want to add some texture to the trench wall that is niceley blended depending on depth (and lit up by the cameras in the deep). This will be quite a hack in pygame with surfaces. I really should be moving to pyglet to utilize opengl's mad blending skillz. Here is the latest!

After day 2 i have a bit better underwater environment and terrain, and the start of basic collision and placement of samples that are sought. I think the challenges will mostly be making this thing not devour poor player's cpus, as I am definitely layering many things on top of each other using blit. Perhaps I might need to do an emergency port to pyglet at some point.. we will see. Anyway, here is where my underwater world stands:

So, after pondering, and scaling back my graphics ambitions, and twiddling in inkscape, I decided to make a game about controlling an undersea robotic submarine, exploring the wall of a giant underwater trench and collecting samples. Yay! Science Game! The challenge will be that the more valuable samples will be deeper, and perhaps in caves, but deep down and in caves, it becomes darker, and control lag increases! Can you get the critical samples you need without losing control of your submarine? This is your mission!

Game about robotics - and no 3d for me

Finally, I dug into robots a bit this morning, and decided, despite a week full of fun tinkering with opengl and 3d, that I just am not ready to put together something that is fun and engaging in 3d in a week. I am really adamant about not just having a game that has robots, but more specifically making a game *About* robots... in the sense that wikipedia nicely summarizes:

Specifically, I like the idea of automation and sensing. i have been ruminating on a game that allows the user to build and automate their own robots, and maybe i will take a look at something like that with chipmunk this morning

I am really excited about building a pyweek game in 3d this time. I have been hunting around for an ideally simple 3d engine.. lightweight and simple but still with decent features. So far the ideal interface I have found is sadly not python, but actionscript, in papervision 3d. One of the big issues is having a really easy way to get blender models into my scene. It is also important to easily manipulate a mesh while it is loaded. Anybody have any recommendations? Both pyogre and panda3d seem a bit heavy weight, but I am admittedly not so well versed in either.

I am excited to participate in pyweek again. I had wholly forgotten about the competition since.. '06 i think, but then recently hacking a little pygame code (trying to simulate ants and emergence), I remembered how much fun the competiton!

What kind of topics might be on the table for March 30th?