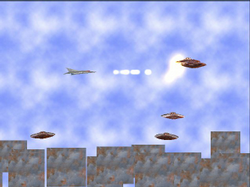 Side Scrolling shooter. Disappear from the baddies.


1% of respondents wished to disqualify the entry.
Respondents: 8

Note, the .zip says it's corrupted, but it doesn't seem to effect the game at all.

Unfortunately our team has had less time to work on this than we would have liked. We hope that some of you still find it a neat concept.

Feel free to extend the game by adding more types of enemies and other content.

PyOgre is great for visual effects, but definitely is sorely lacking some game engine utilities for managing resources, etc.

We also have to develop a model for all the enemies in our shooter; programming that much behaviour will be challenging!

This was talked about last time, but I figure if we open the dicussion early we can have a giid dialog on it.

I propose we change the 'Innovation' category to 'Use of Theme'.

Without a judged category on 'Use of Theme', there is no reward for a team to really deeply integrate the theme into their game. Giving their game a glancing / passing nod to the theme, just enough to avoid disqualification, will be enough. I'll give an fictional example. Let's say the theme is 'Robots'. Team A makes a platformer where you are a robot. Team B makes a game wher eyou design, build, and program robots to perform specific tasks. I would say that Team B followed the theme a lot better then Team A. I think Team B should be rewarded.

So, why get rid of Innovation? I don't think that you're going to get many well-polished, innovative games out of sort-term game compos like this. Games typically fall into 4 categories.

The reason for 1 and 2, where more games end up, is that if you have an innovative concept, you're solving new problems, which takes longer and gives you less time to polish. If you revisit an old formula, a lot of the problems are already solved for you.

I'll leave it at that for now. Let me know what you guys think.