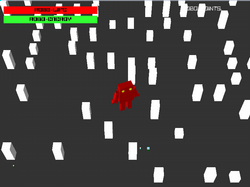 THERE ARE TWO TYPES OF HUMAN : A DEAD ONE AND A DEAD ONE! HA. HA. HA. LAUGH AT ROBO-JOKE! I COMMAND YOU!

PANDA3D REQUIRED, IF YOUR PUNY HUMAN BRAIN IS TOO WEAK TO READ ROBO-README!

OTHER PUNY HUMANS CAN CHECK OUT SOURCE CODE FROM PUNY GOOGLE CODE. ROBOT IS SO MUCH SMARTER IT CHECKS OUT CODE BEFORE IT IS WRITTEN! http://code.google.com/p/crush-all-human/


16% respondents marked the game as not working.
Respondents: 20

I wish I could have spent more time on my entry, but I feel good that I at least got a working game that could be termed as 'complete', merely because there was a definite beginning and end of the game and a mechanic to power it.

Here are things that got left out: So ultimately, I wish I had a lot more time to provide to work on the project. Alas, being all grown up has its disadvantages. I have a feeling that I could have gotten more done with a teammate, perhaps one who could fill in the gaps when I didn't have time.

ROBO-HASH WAS INCORRECT BECAUSE PUNY HUMAN PROGRAMMER WAS TOO STUPID TO LOAD FILE AS BINARY! STUPID HUMAN CANNOT READ BINARY, OTHERWISE PROBLEM WOULD NOT EXIST. "ASCII" ONLY EXISTS BECAUSE HUMAN TOO STUPID!

HERE IS LINK TO ROBO-GAME: http://nil.cjb.net/crushallhuman-pyweek.zip PANDA3D REQUIRED, IF YOUR PUNY HUMAN BRAIN IS TOO WEAK TO READ ROBO-README!

ROBOT CAN CRUSH HUMAN, ROBOT CAN CRUSH HUMAN-MOBILES. ROBOT CAN PEW-PEW AND BURNIFY HUMAN, HUMAN-MOBILE, CONCRETE-HUMAN-CONTAINER! NO HUMAN PRESENT TO OPPOSE ROBOT! PUNY HUMAN DEVELOPER DECIDED "WHAT IS POINT OF GAME WHEN ROBOT CANNOT DIE"? I SAY "IT IS BETTER THAT WAY!". HE SAYS "NO YOU WILL SLOWLY DIE FOR NO REASON AND THEN IT IS GAME OVER BECAUSE I HAD NO TIME TO MAKE PUNY HUMAN SOLDIERS AND HUMAN TANKS".

PUNY HUMAN DEVELOPER HAS PROVEN HE HAS SOME TINY WORTH (IT IS STILL TINY DON'T WORRY!) BY PROVIDING ME WITH LASER EYES! PEW. PEW. DESTROY!