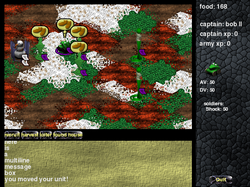 look at them go :D

Hole in the Head Studios - We might have lost our minds...

The team from holeintheheadstudios.ipbfree.com.
This is our 3rd go-around, under different team names.

We now have a complete team, on with Pyweek!!!!!


3% respondents marked the game as not working.
1% of respondents wished to disqualify the entry.
Respondents: 27

I know I posted something about this last time, but it is acting up again.

After some investigation, it appears that if you make a diary entry, if there is only one reply it will say the person who made the entry was the last commenter, when it should be the second person. This doesn't always happen, but often enough that I scratched my head a couple of times thinking someone had replied when they hadn't...

The best way to not miss pyweek

So, this being my first pyweek experience I'm not sure how this works so I have to ask; how do I make sure not to miss the next one? Since I'm registered on the site now I'm hoping an email notice gets sent out before the competition. If not I guess I just have to hope I catch the announcement somewhere, as I don't always remember to check back at the pyweek or pygame websites that often.


It was fun this time around; I've been wanting to do one for a while and never managed to catch it before; I only hope next time I have a bit more time to invest.

Well, this pyweek was a great success in that we only had 1% DQ, and 3% DNW, and we have a really nice, not messy game-engine this time, instead of a big clunky thing :)

I was surprised at how highly we were rated, 16th, especially since there really isn't any game-play there yet :)

Some replies to the most recurrent comments:
"Did not use theme": well, actually the race you are is a twisted coil(snake) and the final version(no upload) there was some rather interesting bugs that made it very twisted, but no crashes anymore :P

"Did not like graphics": This was due to the fact that we ran out of time to change the grass tile, and remove the lava, which really didn't fit, we actually had those changes but they got lost in svn somewhere...

"Empty value for randrange Crash": this is due, I think, to the fact that when a unit dies it wasn't immediately removed form the game, so if multiple units attacked, then it would crash :/

"Nothing to do": well, another thing that was in the final version, but it was just so large I couldn't justify uploading it, but had I anyway it probably wouldn't have worked as I fried my network card :/ I probably should have even though it was like 28 mbytes, because I saw some of the other entries were even larger, but I thought that the rules still stated that you should(must?) keep the size under 24 mbytes, oh well

"The music ig good/superb": we have nihilocrat to thank for that, he finished it all in the first 3 days IIRC, and it is really quite nice :)

"The screen was to small": this is because we used pyglibs for the isometric, and it has some bugs that slow down the rendering when the screen gets any bigger, right now we are only getting 30-45 fps, without psyco of course ;)

"Not innovative": the idea is actually quite innovative, with some resemblance(so I've heard) to Kohan, but different still, you'll see when we finish this :)

"I fought something and nothing happened": this is partly due to the engine, but also could have been remedied in the campaign code itself, by just making an even where if enemy1 is dead, the game ends, as it is this is implemented only in the unreleased final version :/

"couldn't figure out what the controls did": "loiter" causes your unit to stop where it is, "recruit" when over a city will increase the number of troops in a "unit", "harvest" gains more food - I think this is unused in the pyweek version IIRC

"Needed more time": amen to that one :D


All in all, I was rather disappointed by how we finished, but this is also the only pyweek game we've done, except for maybe MGT that really has any potential after pyweek :)
If you are interested, look around the data folder, there is a lot of stuff in there that we never got around to using, but is still really nice, especially since we had two more races(some of which got into the "final" version ;) )

There is also some other music(I actually think I might have put the "wrong" one into the main game, partly why some ppl didn't like it)

A strang bug on 64 bit systems (Linux only?)

So I've noticed a strange bug with a few of the games, which I'm fairly certain the creators did not see. I'm running Ubuntu 7.06, 64 bit. I just tested one of the games exhibiting this bug in my 32 bit chroot (ubuntu 6.06) and did not experience it, so I'm thinking it's probably a 64 bit issue:

The symptoms of this bug are that all game objects seem to be miss-positioned, piling up in the upper right corner of the screen. I'm not sure what the common thread here is, but I experience this bug on at least the following games:

Is anyone else seeing this problem and/or have any idea what all these games have in common that the others do not?

Well, I stayed up way too late the last few nights of the compo, and payed by getting really sick the last day :(
I finally had fydo upload what we had as the final entry and went to bed.

Well....
At about 6(1 hour before the end for me) I woke up and decided to give it another try. There is actually some game-play now, but, regrettably, the file size got up to 25 mega-bytes O_O, so I have decided not to submit it, our entry then is the one fydo uploaded, and it is at version 0.05 for game-play I'd say.

The theme is not at all expressed, but that is due to the fact that game-play itself is expressed very, very little.

Here is our "Ode to Eugman":

Hey there Richard,
RoeBros can't seem to log in and he's asked me to post a quick message here to let you know about it.

finally a game emerges from our engine :D

the campaign loader is finished, and the cool thing is with the approach we took, you can edit almost anything in the game via events, so you could potentially completely shift the gui layout/images/fonts etc because one of your units hit the wrong tile :P(yeah, exec is really handy sometimes)

we also now have the basic gui layout of the in-game hud finished, just need to make action buttons/input_boxes.

then we actually have to add fighting/monsters/glyphs/forts/etc....

well, today was almost a complete wash for me :/

I managed to convert our main.py demo app to a full-fledged state engine, with nice results.

I also finished(I hope) the config loader.
And I changed the data structure.

Luckily, I think most of the engine skeleton is done, and we should have something playable tomorrow. YAY!

fydo started work on the first races units, Nari has some nice buildings done, and Myst has most of the glyphs we will need completed as well.

Tomorrow I will need to make it so that you can create a campaign/scenario, and start doing things in it.

If all goes well we can still finish I think.
Lucky we scheduled a lot of time to play catch up though :D

well, I fell a bit behind yesterday through lack of motivation :/

But we made up some ground today, bjorn got back earlier, and we hit the code pretty hard :)

No new screenies, but tomorrow should see some new tiles, buildings and units moving around, as well as some music implemented, and the start of the in-game gui :D

Another day like this and we'll be back on schedule.
Time for some sleep though now :)

well, I uploaded a rather nasty looking screenie :P

I also got about 75% of the skeleton of the engine finished. And the startings of our parser.

I'll have to play a little catch up tomorrow, and finish the parser and implement the features I skeletonized :P

And then I'll be onto the features on tomorrows schedule :)

Well, the competition started at 7:00 pm for me, and it is now after midnight, so I spent a fair amount of time tonight.

So far I have re-written the isometric engine for pyglibs, it is now about 2x as fast, and much more versatile.
I also now have a basic map up that you can move your hero around by clicking where you want to go, and he stays on the map.
I also have tile transitions working.

nihilocrat has created two music pieces, and a second(shorter) version of one of those.

Narianim has created a nice outpost building, and some placeholder graphics, which I'm not using yet ;)


No screenie yet, but that should come tomorrow.

your team?(if you have a team ;) )
Just wondering what the average is, and who I should watch out for :P

I had thought my team (6 members) was getting up there, but then treeform came and swept me away, with double the members!

On here that would like to join a team?
Anyone is welcome, even learners(programming, artwork, sound, music, etc.), but we especially need some musicians/sfx people.

Currently we have 1 programmer(maybe some help from the other members),
3 artists, and 1 game designer.

None of us are very skilled musicians, though I have played with musagi and Audacity a bit, but not enough to really be able to make music in a week, not to mention programming ;).
I do have some more experience with sfx, but not recently, and I'd rather focus on programming this time.

If anyone is interested, there is a link and an email address on our compo page
(or go to http://pyweek.org/e/hiths/)

When does everyone want to start?
I was thinking the 18th-25th, so that there is a week between the end of warm-ups and the start of theme voting.
Any objections?

Whenever we do it, I think we should start throwing out theme suggestions :)

My ideas:
1: Night and Day
2: A clash of minuscule proportions

I had some other ones that were better, but I've forgotten them now.

We could also use one of the unused ones from the previous competitions, and that could be really cool :)

Check the pygame site to get it. :D

I will probably write a few more examples, clean up the docs, and maybe bug fix it a bit in the next few weeks - but no api changes till after pyweek, if that is ok, or would I need join the "you should dq me for using this lib" crowd if I do that?