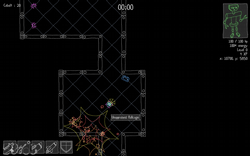 
6% respondents marked the game as not working.
Respondents: 29

There's even a mildly fun asteroids clone in there as an example. We spoil you.

Our game doesn't have a name yet

Well, it's the start of Day 3 and time to get back to work. Unfortunately, one of my fellow team members is asleep on the sofa and the other three are nowhere to be found.

Our development efforts are being stymied by an apparent resource leak in pyglet.text. Run the following, and watch your memory consumption soar:

According to one of my team-mates, 'bismuth' is now a reserved word in Python. I am led to suspect that he was just trying to cover up his own syntax error.

Our team has been encountering an extremely severe problem: we keep getting distracted by playing our game and neglecting the huge amount of stuff we still have to add.

From one of our team members: "How am I supposed to fight spiders that fire lasers when they don't fire lasers, they fire more spiders?!?"

We had lasers on day one, but it's taken until now for our first explosion.

I think there's something wrong with our priorities.

Action RPGs for all

Our game is submitted. By MD5 but you'll be seeing it before long. But just to whet your appetites here's our complete feature list (and not a single word of a lie). Our game:

We even found time to script multiple endings! Seriously, this has been a good PyWeek. We've been working down to the minute to get this all together, personally I really wanted to go back and make sure the interface wasn't going to break. I know there were lots of features and classic RPG elements we wanted to try and implement but didn't get round to. The entire optional challenge dungeon mentioned above, just to give you an example, was implemented in the last few hours.

We're not certain its bug free, so we recommend a saving policy. But when you play, I know you'll agree quite how clean and well paced this is. We are very pleased with our results, now we get to play it!

There's some problem with my MD5 sum, I think I may have generated it by reading the file in text mode rather than binary mode, these things are really confusing. At any rate, you can play the game by downloading it here for now, although you can't rate it. I've asked Richard what can be done about it so it may be up here eventually, I just thought everyone would like to play it anyway.

Oh! You need AVBin, this wasn't in the README. You can get it at http://code.google.com/p/avbin/.

Our game is now up. Thanks to Richard for being so helpful with the MD5 problems. Note that we've packaged Pyglet but you will need AVBin to play. Get it from http://code.google.com/p/avbin/. We're around on #pyweek if you have questions, ask for Membury, mewo2 or amgb2.

Robot Underground: for your enjoyment and pleasure

Well, with the madness of coding behind us, we've managed to take some time out to actually play our game (along with everyone else's). There's a whole raft of stuff we'd like to improve or add, possibly in some future post-Pyweek release, but there's a couple of specific issues which might merit the attention of players over the next two weeks:

We've had some reports of errors that look like this:

This is a problem with pyglet image loading on Linux (I knew we should have tested on Linux). If you want to give us a DNW, that's fine, but if you'd still like to play the game, you can download a set of replacement map files here. Just extract them to the data/maps directory, overwriting the files which are already there. You'll also need to add the following line between lines 20 and 21 of lib/worldgen.py:

We're still working on Robot Underground, albeit at a much slower rate. We've got a to-do list for the next version, but what we'd really like is some feedback from unpaid testers *cough*, I mean players. What works, what doesn't, which bits are too easy, which bits are too hard, where does the story fail to make sense? These are the things we need to know in order to make the game better.

If you have any comments, please feel free to leave them here. Bug reports are also welcome, although we think we've fixed all the major bugs since the competition release.

Well, there's been a lot of positive comments in the feedback and a fair few neutral comments. I guess you can't write a game everyone'll like. I won't do a complete post-mortem on those comments because there isn't much to say, except thank you. There were some featurue suggestions/bug reports but most everything has been covered in the feedback thread we started earlier.

There'll be a post-pyweek release very shortly (Mon/Tue perhaps) with a lot of the major fixes and then an overhaul of the content and engine someway down the line. This is the plan anyway, we're still keen on this project and we hope to see it continue to do well. There may be some kind of website and bug reporting mechanism for players before long so watch this space!

Here it is, our first post-pyweek release. There've been a lot of cosmetic changes and I don't know what they are anymore but I'll mention some key differences here:

Basically, it works better now. Feel free to post feedback to this diary. Our next release (a couple of months away I would estimate) will be a massive content upgrade.

Mostly bugfixes this time around, although there are a few little content tweaks, and an extra super-secret weapon, which I'm sure all you RU completists will want to try out.

The big change in this release, from a development standpoint, is that we've included a lot more logging, to help with balance issues. As such, it would be really great if you could send us copies of your savegames. Eventually we'll have an automated system for this, but for now, we'd appreciate having copies of your save/game0.sav, etc. emailed to savegames@supereffective.org. Only savegames from this version (or later) are useful, so don't worry about old savegames. However, we're particularly interested in receiving savegames from people who had trouble with the game, or who didn't really enjoy it.

As we've said before, it will probably be a while before the next Robot Underground release. However, you can now follow development at our website, www.supereffective.org.

We also have Windows and Mac binaries of the latest release, so if you've been having trouble getting things to run up until now, or you'd like to share Robot Underground with your less Python-inclined friends, now you can.