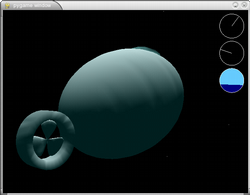 Twenty Thousand Leagues under the Sea

You play captain Nemo and are stranded with your submarine at the bottom of the sea, when you discover your air supplies are running out soonish. The only way to survive is reach the surface - so from now on the only way is up.


46% respondents marked the game as not working.
Respondents: 17

Well, I won't be able to finish, all the huge progress of the last hour or so is a propeller added to the submarine. This leaves a todo list of:

Well, still all I have is the nautilus, but this time it's an actual screenshot :)

Not much works, basically an OpenGL window which displays a deformed sphere.. but, I also have controls done (using quaternions), and three gauges (compass, incline, horizon) - the horizon I already knew how to make, it would have taken all day otherwise.

Next I need a 3d tilemap, where each cube has one of 6 water flow direction.. and the game will be about guiding the ship up before air runs out. The end of each level will be an air tank, and the surface for the last.

I set out to help philhassey's team instead of doing an own entry, but as I rather suck at pixel art, and right now they need NES-style tile and sprite art, this wasn't quite satisfying.
And just now, I happened to have the greatest game idea ever - so I tentatively fired up vim and with a blank file (the "screenshot" is just a mockup, all I really have so far is nothing :P) and might try doing a solo entry.