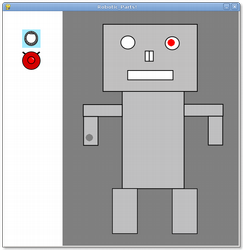 Changed my mind about the image, the game will add the red bits in for you, here is a screenshot of my level editor.

A Pyweek 6 entry by Sid the Grasshopper (john, Rhodri)

Welcome to sid the Grasshopper! This is our third pyweek, and we're hoping to do more succesfully than last time.

Just wondering, has anyone made a python program, to go through all the folders in a directory, and then run the run_game.py file inside it, I made one of these with bash, but, bash isn't compatable with windows.

Also, has anyone created a comment editor? Aka, a text editor with python that asks you for the name of the game your rating, and then has radio buttons for the seperate items you can vote for, and at the bottom has a text field for you to enter comments, this would save it in a text file documented for you. I'm willing to create the editor, but I'm not certain about the top one as I can only do it in bash.

I have however comeupwith a rather simple idea for a game, I hope it works.

Finally, I have my first image!

I have not yet managed to code a thing, so today, I'm going to try and code a level editor, and perhaps do a bit of level loading, wish me luck!

That's the level editor for the curious.

Here is an image:

After spending ~1 hour hacking away at my editor, then I have my first in-game screeny:

I've finished my game, though I had to cut features from it...:(

If anyone wants to build me some levels, then great! Post it on this diary post, and BTW, the bg image is robot.png, but you can create your own.

If anyone has any feedback for my game: Robotic parts, then pelase post it here, so I can start work on a DELUXE version of the game. :D