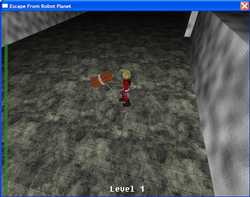 our hero with a big hammer

Self Defence Against Fresh Fruit

Escape From Robot Planet 1.2. You are stuck on Robot Planet and you need to find the gate on each level to go up one level. You are 20 levels underground with nothing but a blaster pistol and a bunch of robots that want you dead. If you pick up a robot part, you can switch to that with the space bar and use it to bash robots to bits. Read the README for more info! Python 2.5 required. If you use OS X, try and find a Windows or Linux system to play the game on.

For Gentoo? users: "emerge boost" will do the trick

openSUSE 10.2 comes with Boost 1.33.1 packages, they just need to be installed from the DVD or online source.

extract, and in the folder type:

Hopefully this fixes it for all the Linux users out there.

Our game is using a custom binding to Irrlicht, and I don't have an OS X system to compile and test the game. I will be making binaries for both Windows and Linux, however. Is there anyone here that will not have access to a Linux or Windows system to play our game?

It's difficult to support a platform that has both a proprietary OS and proprietary hardware. If the OS X license would allow it to be run on non-Apple hardware, I'd support it in a second, but I'm not about to break the law to do it. Also, I'm not going to spend $1000 for a new Mac, either.

This looks to be the best pyweek ever. So many of the screenshots are awesome, that it is almost intimidating. The upshot is that even if we don't win, there will be a bunch of cool games to play!

Wow, there are a lot of games to play in the next two weeks, something like 4 or 5 games a day! I hope everyone enjoys playing Escape From Robot Planet, we put a lot of effort into it, as I'm sure everyone else did. Congratulations to everyone that finished their games! To those who couldn't finish, maybe next time :) . I'm sure everyone learned something. It's the one week where you learn more than you have in month.

For Debian users: "emerge boost" will do the trick since this will install Boost 1.33.1.

openSUSE 10.2 comes with Boost 1.33.1 packages, they just need to be installed from the DVD or online source.

Hopefully this fixes it for all the Linux users out there.