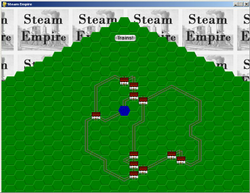 The bad part of finnishing in the last minutes is that you can get some really bad bugs. After deadline-bugfix entry


2% of respondents wished to disqualify the entry.
Respondents: 20

How to play Steam Empire the way it was intended.


If you want to try the latest version, with a functional highscore (fully implemented three minutes past deadline!!), get it from here:
http://srekel.net/files/files/Steam%20Empire.zip

On the behalf of my team, I'm really sorry for these issues. As I said, try the full game, but rate us as if you had only played the first version if you want to.

I finally came up with a simple way to make a game out of our rails and industries.

Implementing it was rather easy (which was the whole point), and the gameplay is rather simplistic, but at least its an f-ing game! Well, when we get the highscore function in I guess.

Basically, the player sets up "routes" between industries. The steel mill needs coal and iron, so the player must build rails between, for example, a coal mine and the steel mill to start making some money. However, the longer the rail, the less it is worth.


Future work include:
- Inpassible (?) Mountains so it isn't just a matter of building a straight rail road
- Better GUI (and sound) feedback
- More industries
- balancing
- and more
It's almost 4 AM now, and won't be able to work that much tomorrow. So I think I'll try and wake up in time before I have to leave, so that I can update my fellow team members on the status of the project, which is now a game! :)

Btw, the game is now quite similiar, in a way, to our previous entry, SwecPower. Although, lets hope we can turn in something a bit more easy this time around.

I've been working with Jonex and Viblo during the last days (the others have taken a break/given up :) ).

Jonex thought we needed a new tile set, so he wrote a pretty interesting script that, using PIL, could generate all the different kinds of rails we would need. The result looked like this:

It also made the code for determining which tile that should be used a lot easier. However, after analyzing exactly how the player would play the game, we today decided to scrap most of the tiles. Well - we decided that we weren't gonna use them. So, most of that work was for nothing. :/

Also, there seems to be something wrong with the rendering. Every other "column" has a "pixel error". Very weird.

Anyways, I've been spending a lot of time rewriting the code that determines what a tile with rails shuold look like. It mostly looks like it did before, but there are a couple of improvements (and one small thing I'm not too fond of).

The game looks like this using the new tiles:

So, we have unfortunately made very little progress since the previous screenshot was taken, even though we've worked quite a bit. The damn rail code, I tell you!

I hope that we can fix some actual game-play code tomorrow, because I can't participate very much on friday and saturday, so I wanna make sure that the project is on the right track (haha, track.. railtrack.. *tired*). A lot of the underlying data structures should be set up at least, so with a bit of luck it's just a matter of connecting them to the GUI. :)

We started yesterday with a meeting over Team-Speak. I had an idea in my head, that I had written down on our wiki, which we decided to go for. The design changed quite a bit during the discussion though, which is cool. :)

The concept is, and I quote: "The concept in Steam Empire is to build a network of railroads between industries in order to make a lot of money."

In other words, Railroad Tycoon Light. :)

We started coding yesterday. Decided to use PGU because it had a hex rendering engine, which is just awesome for games like our game. Although I was afraid we would have to use something else last night, cause I couldn't get it working properly. I solved that this morning though, so now (we just managed to add GUI widgets too) there should be no more technical problems left, I hope.

Today I've mainly been working on the rendering of the railroad tracks. I had to draw hex tiles for a lot of different situations (where a rail comes from the top left and goes to the bottom, for example). I finally got it working a couple of hours ago, and you can see the screenshot in our entry home. It's pretty cool, clicking out rails and watching them connect automatically. :)

Now comes the tricky part I guess (even though it hasn't been all easy getting here): implementing the game logic.

Today I tricked two more friends into joining us. This makes us a crew of six programmers!