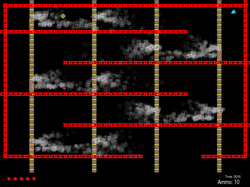 Here's another level of the final game.

TenjouUtena, ataraxia 's Steam game, called Steeem. You will need: Numeric, Polygon, PyOpenGL, pygame, pygext, PyODE to play. Have fun! Get with TenjouUtena on IRC if you find a bug. (please?)

Well, the contest is over; only the judging remains. I didn't have as much time to work on this as I would have liked; hopefully next time it won't be allergy season.

Making this game was at least a useful way to learn PyODE. Our game's strength was the glider dynamics interacting in a vector-based world. A level editor would have been a great addition given more time.

Next time I hope to use PyODE in a 3D setting, but anything not sprite-based would be great.

Well, we have an Release Candidate 1. Everything works, sort of. We made a pretty good run at it, for first time working together (On a program, anyway), first time working with most of these libraries. My Biggest regret was not having the time to make a level editor. I think the game stands up as a sandbox much better then an level progression. But I'll leave you all to decide.

Combining PyODE and pygext continues to prove to be challenging. A Euclidean frame of reference with the usual x and y directions and angular mapping in radians will require a set of translation functions to convert to pygext's frame of reference, where 0 degrees starts at twelve o'clock.

Because of the sparse documentation of pygext, one basically has to experiment with the system to figure out the behaviour and its underlying frame of reference. It's a little like discovering a new physical realm.

The moral is to test early and often. Weaving whole cloth code before running means that you'll probably have to rewrite most of your code because some notions you had of the framework are false.

But at least now our glider behaves as if it really is being driven by the steam jets!

We're goign to make a hang-gliding via steam game. various dials will controll the flow of steam though various vents, and you have to hang glide on them to the exit! You're inside of a giant robot! ANd bust turn his valves to defeat him! Or somesuch. tu

Using PyODE instead of a fake dynamics engine means that you have to try to use realistic values to get the behaviour you want. This can leave you with kind of awkward numbers for things like drag and lift.

On the plus side, you don't have to build your own force integrators.

Currently our hang-glider lifts pretty well over steam, but glides a little *too* well on its own power. Gotta work on that.