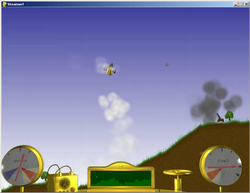 We got off to a bit of a late start, but the basic design for our entry is now pretty clear. It will be a dexterity game of navigating an obstacle course with a steam powered ship. The steam power isn't just a visual effect though, it will cause several quirks on how you have to control the ship.

This was a pretty productive day. The controls are pretty much set, and our little ship consumes fuel and needs to take care of steam pressure. Most of the UI is also in place.

Getting to the "game" part

We now have blimps flying around as obstacles, and the ship has gained a cannon weapon (watch out for the kickback though...) Next up is some anti-air cannons for further difficulty and the goal of the level (landing pad).

Thursday went mostly at work and I was busy with other things in the evening. I did, however, have time to implement shooting down blimps and colliding with them (spiced with programmer-arty explosion particles).

Sooo many things undone. On the upside, I think we'll get enough gameplay elements implemented this time to actually make a playable and (IMHO) pretty fun game. On the downside, there won't be time to add polish, and our entry will probably be without sound and music. All the menus will be a last minute job too, so no fancy graphics there, unfortunately.

I'm already looking forward to producing the "2.0" version after the competition. :)

The different levels for our game are done (10 in total) and what is left to do is add a title screen, menu and scoring.

About our final entry

Whew. Made it in time, but only barely. Hopefully there weren't any show stopping bugs left. The packaging was done in an extreme hurry, so I'm a bit worried. :)

So many things were left undone (again). My biggest regret is that I didn't have time to add any sound effects to the game.

Requirements
I didn't have time to optimize much, so it'll probably take a newish video card to run smoothly.

How to Play
You can change the game to windowed/fullscreen and edit the keys from the steamer.ini file. There is no README included (didn't have time to write one), but there is a tutorial level that explains the controls. I'll paste the hints here too:

For PyWeek 3.0, would it be possible to append the team's/entry's name to the final zip filename automatically? :) Would make the judging work tons easier.

Reminder to everyone about MP3s

Just in case someone doesn't know this yet, as there are some entries that have music in mp3-form: The Windows distribution of Pygame doesn't support mp3s, so your game won't work for any Windows users. Please use oggs instead.