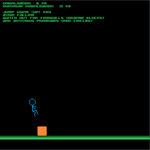 A hacker is trying to hack the top secret files on the Nemesis Corporation's super computer. You control a virus sent to retrieve files from the computer. Jump from file to file while avoiding firewalls and antivirus programs.

I have now finished most of the game mechanics.  This is a simple platform jumping game with randomly generated levels.  I've decided to rather focus on making a complete game that works well than a half finished complex game.

I've now finished the first version of my game.  Everything should work.  I managed to test it on a Linux virtual machine, but don't have access to a Mac so if anyone tries to run the game on Linux or Mac please let me know if it worked.  Now I only have to do final editing and testing and maybe add an executable file for windows.

I've now finished the game to my satisfaction.  I've added music and a Windows executable.

PS the options menu is accessible via the F1 key, F2 switches to fullscreen and F3 toggles music.