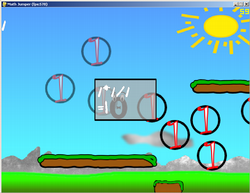 MathJumper - The quest for the holy integral


21% respondents marked the game as not working.
Respondents: 25

First off, here's the link to the Windows executable in case you don't want to download a bunch of libs or can't get it working or whatever :)

If you can't get it running under Linux, look in our previous diary entry.

I've entered PyWeek two times before I think, both times with viblo, and I have to say, this time felt a lot better. Instead of choosing to make a simple strategy game (which is pretty much the only types of games I've made :)), we chose to create a platformer, something that we knew would be simpler.

And it was definitely a good choice, this time. Our game was actually playable a couple of days before the game ended, which is pretty cool. Though, it did have some problems with the collisions right until saturday (I made an error which sometimes made the character go through an object instead of stopping against it).

I tried to make a random level generator, because it worked so nicely for Steam Empire and it could've saved us a lot of time. However, after spending 30 minutes or so on it, it was obvious that it would only create really sucky levels and that we'd have to create some kind of level editor. So viblo did, and it turned out great. :) If you haven't noticed, you can enter edit mode by hitting "e" and using the mouse and the 1-9 and F1-F10 buttons to place things.

Some people are commenting that they have too little time to answer the math question. I'm not sure if it's really because its too hard, or if its because you haven't understood that you can press space while standing on the ground to enter slowmo and jump at the same time. Granted, it IS too hard when the equation is difficult, like 3*6*8, so that's something we could've done something about.

As for bugs, I think the only serious bug we've found, except for the crash on Linux commented on below, is that the numbers you collect don't get reset when you restart a level. Still, its better than how it usually is for us. :D

The graphics turned out really well too. Mostly thanks to viblo and his Inkscape skills. Blame me for the water. ;)

I must say I'm very satisfied by how the game turned out. Not that it's perfect or anything, but given the amount of time we had, we produced a pretty good result.

NOTE: if you can't start the game, remove the "32" parameter from graphics.py, row 22. It should look like this:

The game works pretty well, only a few known bugs: Music doesn't loop. Numbers you've collected don't really position themselves correctly, and they don't get deleted when you restart, I think. Water is a bit too slow (not really a challenge?). Still, those are pretty minor.

One thing we forgot to mention in the readme: There's water on the bottom that keeps rising slowly. If you're inside it, you drown and have to restart the level.

I'm pretty happy with how it turned out. Learned how to do collision handling (not just detection), even though it's just for AABBs. Doesn't work perfectly though... Still, the game is pretty fun, and kinda pretty too! :)

Please let us know what you think!

Now the game is pretty much playable, although you can't really finish it yet. Controls are super simple: Note that you need to collect at least three numbers before you can do a superjump!

We're starting to get somewhere, though it's all very very basic yet. We got 2d opengl rendering, an incredibly simple physics engine, including some collision, and controls so the player can move and jump.

We've also got the basics for gui elements done, and the math module, though it hasn't been included in the game yet.