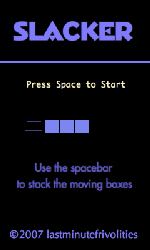 A typical run of how the game goes for me (animated).


Update 2007/04/21: There is a new post-PyWeek version of the game (version 1.2) that I have now uploaded to the PyWeek directory. Some of the updates are:

Slacker
So I woke up on the last day of PyWeek competition and thought, "Hey, I could make a game!"

You are looking at the results of the sa(i)d attempt.

It's a clone of an annoyingly addictive game that I played at a restaurant one time that offered an iPod or PSP or Nintendo as prizes, and if you could stack the blocks to the top, you would win the prize. Use this game to practice for the arcade, and if you win an extra iPod as a result, maybe you could send one my way. :)

In other news, this game was also designed to be a one-switch game, meaning that since it is played entirely through the space bar, it is able to share enjoyment (and annoyment) to those who aren't able to use more complex control systems.

I guess since other people are posting hints to their games, I can as well. If you're having a hard time and want to make things a little easier, try pressing F1 a couple of times.

Last day: start, finish, and everything in between.

So yeah, this was a very last-opportunity entry to PyWeek. I'm on vacation right now, and things have been really busy with me switching jobs and everything. However, I had a little bit of time when I woke up a couple of hours early this morning, so I hammered out most of the gameplay before breakfast. I was pleased with what I was able to do, so I created an entry page and uploaded some preliminary screenshots. As we drove around for the day, I had little snippets of time where I could add more spit and polish to the game. Finally, we all hung out at the mall after spending most of the day at the zoo, and I was able to sit on a couch and upload the final version a little while before the deadline.

Anyways, enough of the story. Time for the official "postmortem":

What went right:
The best thing that went right about this project was having a small scope. As a result, I was able to accomplish everything that I wanted to do.

What went wrong:
Uhm... not much I can think of. I'm actually really happy with everything that happened with this project, and I consider it a fairly complete (albeit small) success.

Rethinking what I think of my project

(Top note for those not wanting to read through the entire post, there is a updated version of my game Slacker, where it now offers continuous play rather than quitting after every play)

Right after I finished creating my game, I was pretty happy with everything and couldn't think of anything that I didn't like about the project.

However, after playing through around half of the other games, I've realized just how good the other games are, and how little my game brings to the table.

So even though I'm pretty pleased with being able to create the game, there are some things I would have liked to change to make it better.

So yeah. It was a very fun exercise to write a complete game in just a few hours, but it was only possible by choosing such a well-scoped project. It's nice to take my own advice every once in a while though, and start small before working one's way up (after all, up is the only way ;) ).

I took a little bit of time to add one of the features that I've been wanting, which is continuous play that doesn't quit when you lose. You can download the updated version here.

P.S. -- I would appreciate it if anyone could give me tips on packaging the Skellington with py2exe and py2app -- I haven't been able to write setup.py scripts that recognized the required modules -- anyone have tips in this regard? Thanks!

It seems that I'm not the only one who ran into trouble trying to package the Skellington into an executable with py2exe. The main problem seemed to be with the way the Skellington loaded the lib directory, and it had trouble finding the required modules once packaged up.

So thanks to some help by many other people, I've been able to create a Python script that will package up your game.

Here is the setup script. Extract this zip file into your Skellington game's lib directory, then execute the script. Give it the name of the final EXE that you want to create, and then tell it if you want it to be a console or Windows app. It will take care of the rest, and place the results in the /dist directory, ready for you to rename, zip up, and upload to your favorite host.

It's still in the early alpha version, but I hope it's helpful to you, and the code is released into the public domain (there's not much to it).

This script worked for me, and allowed me to finally create an EXE package of my game, Slacker.

Please place any feedback or questions as comments here, or feel free to e-mail me at hanclinto at gmail dot com.