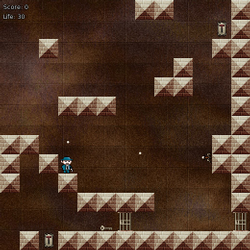 Looking good. The game is actually starting to become playable, with enemies and stuff!

Game: Which way is up?

A traditional and challenging 2D platformer with a slight rotational twist. Help a mysterious big-eared salaryman named Guy find his keys in a labyrinth of dangers and bad dialogue.

Team: All code, graphics and sounds by Hectigo aka. Olli Etuaho

Stay updated about the development of the game by visiting the game's home page: Which Way is Up. The next big release after PyWeek, 0.7.0, was published in May with one new enemy type, 7 new levels, better animations and more. And I plan to continue development beyond that.

Attack of the communist balls

Pekuja's warmup compo seems to have become quite popular, and my entry is probably as finished as it's going to be before the deadline. I might add fancy stuff like menus and high scores later, but for now I'm quite happy with what I've been able to scrape together in a few days. Let's hope I'll make an even better game during the actual pyweek!

The epic struggle between communist and capitalist balls can be found at http://www.hectigo.net/puskutraktori/one.html

Which way is up?

Well, the theme is here and I also have a game idea now, so so far everything seems to be in perfect order. The game will involve a man, an umbrella and climbing, but I think I won't reveal the rest of the concept until later. I bet we'll see a lot of climbing-centered games in the competition this time, but I have a few tricks up my sleeve which might just make my game stand out from the crowd. I hope it turns out good, and I wish everyone will have a great time making their entries. So have fun, everybody!

When good news do bad things

Well, it seems like there won't be an umbrella in the first release version of my game yet, and thus no combat or parachuting, but I guess that won't be too much of a problem. I've got the basic game engine in a good, albeit hacky, shape, and I'm currently in the process of adding menus and more levels. I should be too, because I'll have to finish the game mostly by tomorrow evening (GMT+2). After that some friends are coming over to have a little party, and unfortunately it's not the kind of party where I would be making games. ;)

There are some other very good looking entries too. TOBA's game has great production values, and I can't wait to play the game. I hope they'll just have everything ready by the deadline. Also, the theme seems to have inspired a lot more variation than I'd thought. There aren't that many 2D platformers. There are a few aviation-centered games, but they don't look too similar to me.

I hope I haven't forgotten anything important. I still have a couple of hours just before the deadline to add final corrections, but I hope I don't have to. There should probably be more levels, and there are a few imperfections, but the game seems fun to play, and I'm pretty satisfied with the graphics and sound effects. A longer diary entry about everything that went right and wrong during the week will come some time during next week.

So, PyWeek 4 is over, I've tested almost all of the other people's entries and released two updated versions of my game after the competition. It seems like we have a record number of entries, and most of you have done a very good job - or at least learned a lesson for next time. I guess it's time to look back and analyze my doings a little. Overall I like what I did over this PyWeek, and gained a lot of confidence by doing everything myself.

Stuff that I did right this time:

Stuff that I didn't do right:

And then one final note - to achieve better cross-compatibility, I used a function for fetching the user's home directory in Trip on the Funny Boat as a point of reference for writing my code. The rules state that using "existing personal codebases" is forbidden - if you think this should be counted as such, disqualify me if you will. I didn't actually write the code in question, but as I was a member in the project, I had a good idea what it did. Should've probably asked about this, but, well, I didn't.