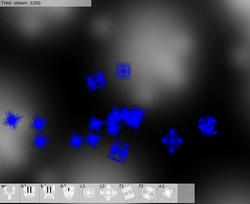 Look at all the units and a city!

Glacticus would be a (m)morts set in far future with starships larger then starts and made purely of energy. Also game would be in 3d with PyOpenGl, the game play would consist of traditional RTS on a 2d map which is the entire galaxy. It would be fully persistent so when player logs out their armies would still be on the map for other players to kill or be killed buy. The game play would consist of correct allocation of energy and time into massive starships, base construction and research and skill at fast tactical decisions under fire. The basic setting would be to get to the core of the galaxy and keep it as log as possible for core contains most amounts of energy. Visit ti at http://www.atlantisinterior.com/galacticus/


4% of respondents wished to disqualify the entry.
Respondents: 18

i had this idia for qute some time... it would be cool to try to make an mmorts in 7 days!

simple gui and network stuff is under way ... will have screenshots soon some work still on design...

it runs on steam

Well I guess it “runs on steam” is a bad theme but good for me - I can work in any thing it into any sci-fi type game setting. I would just the ships collect steam that is floating around in space near stars and use it as a basic building block. The H2O is needed to fuel the ships in some way probably for the still semi-organic brain they use … so every thing will really run on steam as the main fuel source.


What to get working first:

Stars provide the steam clouds around
them for Stellarconstructions to collect

Server logs players in and keeps track of their property. Also it produces time step; only it can move and change the game state. It can receive orders and messeges form players.

Client program that Player uses to view the server state in 3D. It also sends and gets messages from server.

Player Creation. Give player Stellarconstructions and some Hyperships. Create then next to another player so that immediate contact and possible conflict happens. (Rather then players feeling board on different corners of the galaxy)

Messages a frame work for a global in-game-chat. User GUI and server side broadcast all.

i can see units on server and move then around now on server. That is cool but the interfase sucks big time ... and there are tons of visual artifacts...

well the network is killing me. Linux and windows seam to handle networks deferently plus there are fire walls everywhere. I found that my firewall been a problem. Well i dont know hiw people would be able to connect and play my game... i might loose soly to connection problems.

Added sound and better packing for data ... some bug fixes on server and client if you going to test it contact me at in irc at #pyweek i will give you the latest version (becouse this might not work with server)

Well now the ability to build a city in game is added and steammers makes steam and every thing runs just fine ... well alsmot fine ... need to sleap to make it a wake tomorow!

py2exe was easy for me when i found out about the PIL bug ... if any of you cant make PIL load imiges form a file while in EXE state tell me i have the answer!

Galactius is done server is up!

you can log in now and build, kill and just chat...

I have added a galacticus home page at
http://www.atlantisinterior.com/galacticus/