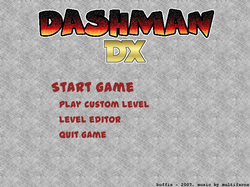 A Pyweek 4 entry by buffi

Dash and jump your way to the top.

Finally! Dashman DX has gone final. Feauturing 16 levels of pleasure, nice music by super multifaros and a level editor that you can generate custom levels in (that you of course can play later.

Spam me with comments

And yeah, the first jump at level 3 is a bit tricky... might fix that

Major progress all over the place

Today I have
And probably more...


Still left to do is

It looks promising though. This game will be very nice :)

New demo!
Controls are still the same as the last demo.

When walking, use dash to get a speedboost in that direction.

Took me too long...
I really shouldn't do graphics

A Demo/Engine test! Try it out and tell me what you think

Been making solid progress so here is a demo of what I've got so far.

When walking, use dash to get a speedboost in that direction.

When jumping against a wall you can press Spacebar to walljump in the other direction
Important: Some people seem to have problems walljumping. You do not need to press any arrow key when wall jumping from a wall. Just jump up against the wall and press space. If this sends you against another wall you can simply press space again to wall jump again and so on.

It is however really lame so far but the controls are (can be used while playing).

When placing 1 and 2, simply press where to put it. When placing 3 or 4, press two positions aligned horizontally or vertically to draw it between them.

There we go... got a working level editor and am quite pleased with it. Gonna tweak the physics quite a bit and then move on to doing something about the horrible horrible graphics.

Gotten some basic physics done. Looks like it will be a xjump kind of game, but less sucky with a heavy influence of different kinds of dashing. I've got a basic engine working ok, but need to incorporate a bunch of stuff.