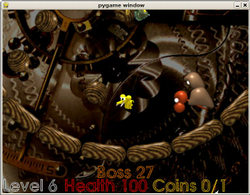 That's one twisted theme. I have an idea forming though - it will be kind of a shmup or platform, but with twisted (literally) levels. As you can see, so far I have the Allefant and a twisted line. "What might be up there?" thought the Allefant.
And the truth is, a crash - as the twisting of the level causes a singularity (division by zero) when the distance to the center gets 0 :P

I spent most of yesterday in Blender, even if all I did was the "up" frame of the Allefant, but Blender insisted to mingle the two poses in strange ways :/ The wooden ball was much simpler to do.

Yesterday I spent some time making a title screen, and writing the theme music (8 seconds of music took me like 2 hours :P). And yes, I'm brilliant with timing as ever, doing title screen and music while not having any game yet.

As for the game, I got spatial hashing working, so I could make levels now as big as I want without a performance hit. Next will be moving objects (platforms, enemies), interaction (switches, enemies, NPCs).. actually, I should first make an editor and as goal to collect something and reach the exit, after I manage that I should think about the stuff I just said :)

There's some pythons which will give advice to the Allefant, and there's two enemies: Cogwheels and springs. Also I have text rendering and a mouse cursor now.

There's also kind of an inline editor, by pressing keys an object corresponding to the key is placed at the mouse cursor, and the whole thing can be pickled to disk and reloaded.

Time is running short. By now, counted in hours, I guess I spent as much on this as on a complete LD48 - and that's how far I usually get in LD: A half finished engine with a boring test level :P Anyway, still Friday and Saturday left, so a recap on the progress:

Oh well. In an attempt to still finish something, I started work on my game right after I got home from work, not even logging into IRC. But then somehow I ended up making a Leprechaun in Blender instead of starting with level design..
So that leaves tomorrow to try and hopefully get a bit of gameplay out of it. For now, watching the Leprechauns is kinda fun.. when two of them meet, they are starting some weird behavior I can't explain..

Also, my actual vision seems all twisted right now, adjusting to the twisting in the game. All text here in a straight line looks like on a circle outline, and when moving the head, it all gets swirly.. not good :P

So, be warned, don't play this game for too long or it will negatively influence your vision.. :P

In case someone prefers an .exe for some reason, I uploaded one here. (Made with py2exe.)