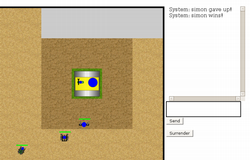 A Pyweek 5 entry by simono

This time, I made an unconventional game - from the development side. I wanted to have an RTS in the browser no matter what - it sort of worked.


38% respondents marked the game as not working.
1% of respondents wished to disqualify the entry.
Respondents: 8

maybe I'm late or nobody dl'ed the offical torrent, but it has only got ONE seed... that can not be true. dl'ing from the site is definitly faster and it shouldn't be.

So please if anybody could startup their finished torrents... you could for example at least let the torrents run while you're testing the games or smth like that if you are concerned with upload-bandwith. I dont want to wait for 4 days.

Also: are the unofficial torrents any faster?

ps.: The seed is from argentinia and so is the other peer I'm downloading from. Thank you.

RTSimple... thoughts (aside from: sorry for the hard install, testserver finally up)

This time, I made an unconventional game - from the development side. I wanted to have an RTS

in the browser no matter what - it sort of worked.

You can see the result here: http://nekapuzer.at/games/ .. Or better yet, download the final submission

If you want run the RTSimple-server you don't need a webserver, but the python-django module (comes with its own testserver) and a mysql-server.

I didnt include a howto for windows users, but you can download if from the django-site (see below) and install via "python setup.py" .

I used lot's of tools, that didnt make it into the README. So here there are:

Handy library for DOM-access and other JS needs

There are a few things I'll code today, that are missing in the final submissions:

And when that is done, I have to balance the units and create more, interesting maps.

In general, the tech-side worked better then before... using django, also first-time, was a relieve. I know my way around JS and its quirks, so now horror there either.

Yeah.. about that. It sort of didn't make it into the final submission lol. Maybe you think it's "twisted" enough to have an RTS with browser-tech. However the full story goes like this: This is a fast paced game with a duration of maximum 5-10min. To make it even more stressfull I planned on rotating (twist!!) a patch of 5-10 tiles in the middle of the map, where usually something of interest is. The buildings, units

, etc. on that rotating-tiles would of course move with it... though, that didn't really make it into the submission.

My Javascript engine turns out to be simple , yet does what it should.. I'm confident. Also I hacked together a simple Model in django and integrated the A* search from pygame-site.

On top the django admin interface... below that a screeny of the "engine" so far. Nothing much to see really.

Tomorrow I'll try connect the two via ajax so I can finally issue commands to my units so that they don't just move on predefined paths.... and hopefully the attack-order will be in place as well. If I manage to come that far tomorrow, I think I'll be able to make some sort of game-browser on sunday and tada: a finished game lol

too much work, couldn't do a anything for pyweek so far.

still, I want to produce *something*. So I came up with the idea of doing a super-simple rts. like so:

Game duration should be 5min, only 2 players. Only 3-5 unit types, which differ in speed/attackrange/attackstrengh/defense

My plan is to write a simple prototype and then make it work in a browser ... ajax ahoi. going browser-based will probably make it akward to play, but it should be a proof-of-concept of some type

Also did a little warmup but will probably not finish it - made to many mistakes :-)

Nevertheless I'll show off a screenshot since I'm content with the visual quality and will try to achieve something similar in pyweek.

btw: this game is called "Humans".The two people of blue and red fight against each other over "planet"-control. The players must utilizy that war to their advantage to build 50+% of all planet's capitals.