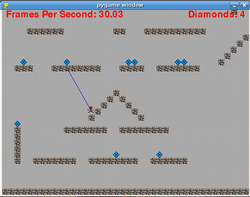 This is the final state of my (non) game.

Again, it's just me working on this, I'm not sure if I'll get a chance to spend the whole week working on this but I'm looking forward to putting more time into PyGame!

Well PyWeek4 is done for me

Well that's it for me my (non) game is finished. I wanted to do so much more with it but real world events like my job and my wife's birthday ended up getting in the way.

That and I spent way too much time wrestling with pyODE.

All in all this pyWeek was less fun for me then last pyWeek, since I spent more time this week being frustrated. But I think that I may have learnt more during this pyweek then I did last time so maybe that's a good thing.

One thing that this pyweek did for me is strengthen my resolve to get a nice simple sprite engine going and release it online. That way I will be able to reuse my code next pyweek, rather then spending all this time trying to reinvent the wheel.

By there are some really strong entries out there and I look forward to trying them out. I'm really amazed at what people can come up with in a week!

Especially since I've been unable to come close to creating an actual game!

Great job everyone, see you next week!

Ahh pyODE I thought you were a good idea, your physics seemed so good...but your collision detection (and my wife's birthday) has bested me.

No matter what I do you seem intent on destroying my frame rate or letting my objects pass through walls.

sigh...it's been fun this time but I don't think that I'll have anything close to anything by tomorrow...my idea wasn't bad but trying to integrate pyODE into my game just didn't work.

Not that pyODE doesn't work...just that I couldn't figure out how to get it to work in the context of my game. All I got was hours of frustrating moon physics, frame rates of 2, or characters sliding through other objects.

What I need is a good pygame/pyODE or pygame/physics tutorial...maybe I'll try to write one after this pyweek so that I can use the code next time!

After the second day

Ah, the old second day, didn't get as much done on the second day as I would have liked. Instead I spent too much time reorganizing my messy code and tracking down bugs.

So two days in and I've got a basic level editor down, and a main game that will load levels...and a character that moves...but no game to speak of!

Hopefully tonight I will be able to add some actual game play into the system!

Must remember to make code available

I really need to make my code available after this pyweek with some documentation. Spending all day re-figuring out old pygame code that you haven't look at in a while, when the solution is located just a few few directories aways, yet looking at it would be cheating, really isn't much fun.

Well I take that back it's actually a little bit of fun since I was pretty pleased to get to where I am. Which when considering some of the other entries really isn't that far at all, still I'm happy.

Now that my game levels are saving and loading and I can create levels, I really need to make something happen!