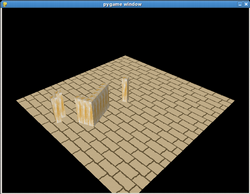 The beginnings of a level

We only come out to participate in pyweek.

Two of our team members are in Sydney and one is in England, so the two Sydney members brainstormed today while the other slept. It turned out to be mildly productive, we now have a plan and a git repository, two very important things!!

Here is a link to the photo of Malcolm and I working hard: Group photo

The game idea we came up with over brunch yesterday -- a wall-twisting 2-D game -- seems to hold up after thinking about it some more. There are a few weak points that we have to iron out, but the concept looks sound. Whether we can do something in a week of part-time work is another question entirely, but that's the fun of pyweek. Like a lot of teams, apparently, we struggled to come up with an idea that was truly appropriate for the theme, so once we found once half-decent idea, we pushed it around a lot to make it work. Since then, I've thought of a couple of other things that might have worked, too, so taking time to think of something to build isn't crazy.

We were able to split the work yesterday into two pieces. We quickly knocked up a level description and loader. Then Matt has started to work on rendering that graphically. Meanwhile, I'm working on the ascii-art version, just getting the movement logic correct so we can watch our little character (who seems to have become known as "dude", even in the code's variable names) wander around. That more or less works now, so we can focus on some of the other mechanical problems whilst the graphics are taking shape.

Other recollections..hmm... Skype is handy here with David sitting in England. A two hour open-mic session last night helped work out a few more details that would have taken longer on IM or IRC. Including the discovery that David is using Windows at the moment, so a quick setup of a subversion repository was required (I always have to look up the docs to get that stuff right), since git on Windows is a little fiddly right now (requiring an install of the cygwin tools); it didn't seem worth taking on the extra learning challenge right then and there. Subversion will work okay with three people.

A lot of the challenge for our game design (as authors) is going to be creating valid and fun levels, so we need to build some tools for that soon. Managing our time this week is going ot be crucial -- we all have day jobs of some kind of another and I'm feeling a bit over-committed right now.

Nearing the end of pyweek.

Even though we haven't been posting often we have been working hard this week. We may not finish a complete game but it was sure better than last pyweek (don't ask). I did learn alot this pyweek, especially about pyopengl, optimisations (I did not optimise early, just as needed to keep the frame rates up), rotations and collisions. If all goes well tonight Dave, Malcolm and I may have an entry to submit....

Ok we hit some major roadblocks on our end and won't be able to finish. I'll post what we did make on google code.