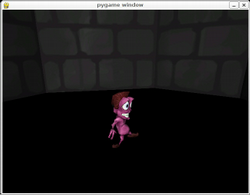 So, it's about time that we write something here i guess. Our game features the story of the dancing peach tree.

The game takes place inside a large well, where you will help the tree grow towards the light while protecting it from small evil monsters. The little guy on the screenshot will most probably be our hero, sitting on top of the tree. More on this later.

For now we have this model and great tune fore the title screen, as well as code for loading and drawing parts of the scene. Tomorrow it's time to dive into the real game code.

I'm having a problem with rendering vertex-arrays with pyOpenGL 2. The problem only appears on some installations, and with pyOpenGL 3 everything is fine.

The problem is that opengl seems to keep a reference to the vertex-array, which i have to update every frame, which leads to a memory leak.

How should i make opengl release the buffer after it's used?

version 2 is considered the latest stable release right? i'd really like to drop the support for it, but since version 3 isn't shipped with ubuntu that doesn't seem to be an option :/

also; i have written a small optimization for keyframe animations as a compiled module in c. is that allowed, as long as the source is included and there is a fallback on a slower python-routine?