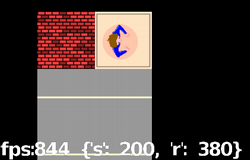 A Pyweek 3 entry by korg

Ive had a patchy 5 days of progress. Initially i started using a pythonic opengl scene graph library, but then i hit some issues with what I wanted to do so I ended up writing my own (yes, again) (yes, from scratch, with the odd peek at qgl).

Anyway, it wasnt that hard, although I still have some issues to resolve. ;) Im really kind of happy with it too.

It has, client/server seperation (fake or udp), scene graph prettyness, transparancy (yay, although there may be some rendering bugs :) and lots of other cool stuff. Fonts too a while to get, but it has them too.

What I dont have is actual gameplay. Much like last time. *sigh*. Still, the client is just a dumb render engine, so I should be able to do it all in pretty plain python in the server process.