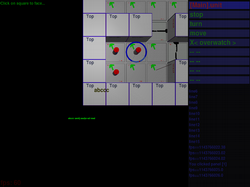 A Pyweek 2 entry by korg

My idea is that you're on a colony and you have to keep the steam cooling for the reactor operational. Time permitting, Im going to make that harder by adding aliens.

I live in Melbourne, Australia.

I have a beginning idea for a game (theme vote permitting) but I want check if its 'legal'.

Im going to write my game logic in python (well, duh, obviously) but I want to write my user interface (graphics, input etc) in plib (http://plib.sourceforge.net/) which is a c++ graphics library.

Part 1 is that there _ISN'T_ a python interface for plib. Now from reading the rules, making one in the contest would be ok. (Under the bit that says: "doesn't preclude the use of supporting languages (eg. C or C++ libraries")

My problem is that if Im going to write code to do some of the UI, Id much rather write:

The idea is that the python engine could just do "begin burst_steam_pipe animation at x,y" and the C++ engine would draw and animate it and python could keep on with the game logic leaving C++ doing 'grunt' work.

The thing is that that would be more than just a 'simple' interface to the library, rather it would handle more complex stuff like animation and things like that which is why I'm posting here.

The key points seem to me to be:

It _feels_ ok to me (as the C++ code is for 'grunt' work only, graphics, collision crunching, all which seems to fall under 'optimization' and not game logic) but I thought Id ask....

Maybe we should insert into the rules (at point 2) something about languages and not roll it into "Entries are to be written 'from scratch'" section?

Why oh why is there no shading?

Hi! I have a newbie opengl question....

But once I texture it, the shading goes away... Im obviously missing some magical opengl command. :-/ *sigh*

(also note that the first object not being textured is another bug, but it just happens to help illustrate the problem :)

I did find a refernce to GL_LIGHT_MDOEL_COLOR_CONTROL, but that doesnt seem to be in my pyopengl library... hmm.

Being too smart for my own good, I took my working engine and tried to add post rendering alpha blending of transparent objects but now Ive got a blank screen.

Slow progress... but finally moving ahead...

Well Im way behind. *sigh* Mostly its my fault, although Telstra get some of the blame.

The first day went ok with my getting opengl rendering going quite easily.

The next two days were a loss with blending and alpha channels defeating me. *sigh* (Notice the lack of 'game logic' mentioned so far?)

Yesterday was mostly taken with convincing my ISP that our Australian telecom monopoly phone company broke my ADSL link. I had to eliminate everything at my end (including dragging the fileserver into the kitchen to plug directly into the main phone input) before they could even get them to look at it.

Today I made quite good progress. I stopped working on the opengl stuff and went back to a text interface for developing the game logic. Well now I have map loading, path finding and all sorts of goodies.

Its seen here determining what you can see from the room 'K'. It does other stuff too, like path finding along the room paths. Im not sure that it will be fast enough, but hey it works.

I did spend a chunk of time trying to work out why my paths were mostly too lon, only to realise that I was storing the PATH_SO_FAR list but then appending to it later. I should have been saving PATH_SO_FAR[:]. I cant believe I did that. Oh well.

Atlast I have some graphics. (no thanks to glBlendColorEXT :)

So, I have a 'font' texture that Ive made and loaded and it seems to be working fine on constant text. Excellent

Ok, code that up. Put it in my scene graph.. excellent. Seems ok.

All my fonts turn into opaque squares. Huh? Weird.

Um. Well I did some changes to allow render time displaying (rather than making a scenegraph model), maybe I didnt turn something on. Nope. That code all looks fine. Um....

So, _Lots_ of code checking later... I finally discover that the glGenTextures call is returning a texture_id for the font of 24837324 (or something huge). Hmmm. Ok, thats before Ive loaded the font image... Um.

3 Hours later... It seems that I initialised my textpage class _BEFORE_ calling mygame init, so opengl cant render a texture.

I think thats my problem. Its not that I consentrate on graphics too much, its that I cant let bugs go without working out _why_ they dont work. And it just so happens that my newbieness to opengl translates into lots of bugs. :)

Its not looking good...

Damn it... i think its defeated me. :( Im pulling an all nighter and Ive just discovered a flaw in my path finding. :( Damn it all.