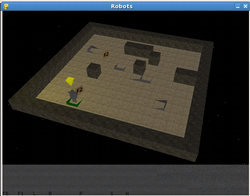 The game so far, functional but ugly.

In the beginning, there was space. Next came robots. Then, the robots lost all the F2 keys off their keyboards! Now, it's up to you to help them find their lost keys. Program them using the commands, although their memory banks can only hold so many commands. Go through the tutorial for information on how to play, and if you have any better idea of exactly what is happening in this game, go ahead and substitute your own reality.


33% respondents marked the game as not working.
Respondents: 12

Version available on the web

We have made our submission version available on the web if anyone wants to look:
http://www.fakepants.com/SpaceRobodyssey.tar.gz

Final glitch at the last minute

We were not able to submit the gzipped file but hopefully the md5sum and hash got through on time to validate our submission. Also I must apolagise to one of our team members, I quoted his name Andy Beany in the doc file when it should be Andy Borrell, sorry for the mixup.

We have just added some particle stuff, and we are on the way to fixing the interface and adding polish. We have levels, 3D but no sound. I will post a screenshot in a little while.

We haven't written much so far but we have made some progress. We have designed the game and worked out a lot of the implementation.